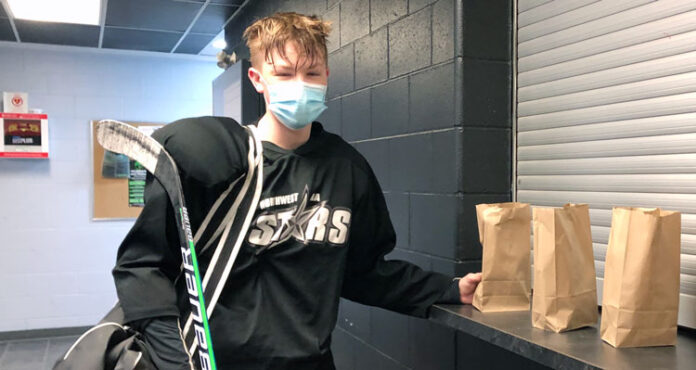 There may not have been much in the way of minor hockey games this past season, but that didn’t put a stop to early mornings at the rink for players and parents alike.

From Feb. 24-26, PineRidge Ford Place on Flying Dust First Nation played host to the annual Snipe and Celly Breakfast Skills program, training sessions that attracted close to 25 young hockey players looking to improve their skills in preparation for what everyone hopes will be better things to come.

“The breakfast program went very well,” stated Clay Debray of Snipe and Celly Pro Shop. “The Snipe and Celly Breakfast Skills program is something I have run the last three years. This year I took a step back on the instruction side of things, however, and had Trach Power Skating come in to run the program for me.”

“When the kids get off the ice, I have breakfast prepared for them in the lobby,” Debray said. “It was a little different this year because it was a bagged breakfast, but it was still nutritious. This year, they just had to grab it and go.”

Among the many parents whose children took part in the program is Meadow Lake resident Andrea Dubray, Her son, Louis, is a U15 player, while her daughter, Jasmine, is U13.

“Personally, I love the breakfast program and what it provides for my kids in terms of skills and commitment,” Dubray said. “Louis and Jasmine have been in the breakfast program for a few years now. The program helps the kids in breaking down their skating into body positioning, edge work, shooting, stick handling and so on. It’s more like fine tuning a rough running car and getting it to run smoother.”

This year’s program also provided participants the opportunity of still having more ice time during a year that saw COVID-19 restrictions impact hockey at all levels.

“The kids have been committed and it’s been beneficial because they get a little more one-on-one with the instructors and coaches,” Debray noted. “To get that extra skill development is huge for the youth. If we can keep offering an opportunity for them to be physically active, that is a benefit. Minor hockey will wrap up March 14, and that’s when I will start designing even more programs because we will be keeping the ice in here at Flying Dust.”

Dubray, meanwhile, said it was very special for her children to be able to continue to skate this year in spite of the restrictions.

“A lot of other places didn’t have the privilege we had this season,” she said. “I am grateful for all the coaches and volunteers who took the time to do this considering all that is going on with COVID-19. They need to know how much that is appreciated. I’m sure I speak for most parents and kids when I say thank you.”

Dubray said she is also thankful to her parents for helping out with getting her children to and from the rink.

“It wasn’t difficult at all getting my kids up – they set their alarms and were out of bed before I was because I was on night shift and wasn’t sleeping until after 1 a.m.,” she said. “They both love it, so the routine is easy because they look forward to it – anything to step on to the ice. Also, with my kids being in separate sessions they went two separate days, but on the third morning when their sessions were back-to-back, my mom helped me by bringing my daughter (for 7:30 a.m.) and taking my son home so I wouldn’t have to make four trips. It’s wonderful to have the support and the help my parents provide for me and the kids. It’s great to have a hockey-based family, as we all love the game.”

“These sessions are a sort of prep for the extended spring and summer programming I will also be offering,” Harrington explained. “Every hockey season, goalies develop some habits – either some bad habits or things that just need tuning up. These sessions are designed to be a tune-up going into the off season, a reminder of what kinds of things need to be working really well.”

Debray said it’s great to have Harrington at the Flying Dust rink because of the knowledge and expertise he can offer.

Harrington also said it’s been a tough year for everyone involved in hockey.

“It will be interesting to see, come next year, if extra skill work has benefited people or if we have a deeper understanding of how important game play is,” he said.