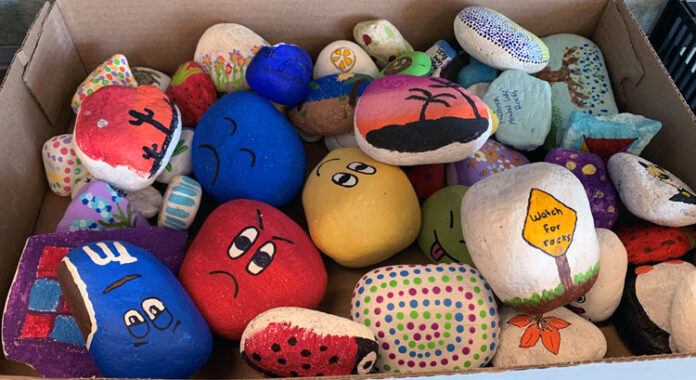 A rockin’ new initiative was introduced in Meadow Lake this week.

Today (May 27) marks the official launch of Meadow Lake Rocks, a project inspired by a North American-wide trend and organized locally by teachers at both Carpenter High School and Jonas Samson Middle School.

“It was a new discovery for me this past fall,” explained Julie Beyea, a French Immersion and visual art teacher at CHS. “While on maternity leave, I returned to New Brunswick with my kids to stay with my parents for a while. While there, we would frequent the walking trails and we kept finding all these rocks that were painted.”

Upon examining one of the rocks, Beyea discovered the address for a Facebook group written on the back.

“I visited the group to figure out why we kept finding all these painted rocks all over the place, and discovered it was part of a movement called Kindness Rocks which takes place all over North America,” she said. “I later found out they also do it in Saskatoon and other parts of Saskatchewan, but nothing had been done here in Meadow Lake.”

As a result, Beyea and her students teamed with Tyson Snelling’s Grades 5/6 French Immersion class at Jonas to paint a number of rocks. The students were scheduled to visit Lions Park this afternoon to hide the rocks in the hopes local passersby and visitors to the park discover them.

“The principle basically is, when on a walk and you come across one of these rocks, you can keep it as a way of brightening your day, or you can take it and hide it somewhere else for someone else to find,” Beyea said. “I thought it would be great to kick off the initiative locally, but anyone can participate.”

The Facebook Page “Meadow Lake Rocks” also went live today as part of the launch, and Beyea said people can access the page to share their plans to paint and hide rocks or to talk about the rocks they have found.

“Social media is an easy way people can also post clues as to where they hid some rocks,” Beyea said. “It’s amazing how something so simple can really brighten your day. It’s an inexpensive activity anyone can participate – from little children all the way up to senior citizens.”

Beyea also said, just because the students are launching the initiative at Lions Park, it could spread throughout the community and beyond.

“Even though we’re starting it, this is a community project,” she noted. “I would be thrilled if, at some point this summer, I find one of the rocks at the Meadow Lake Provincial Park. I’m hoping it will grow and expand – Lions Park is the launch point, but it’s not going to be exclusive to Lions Park.”

According to Regan Beck, parks and recreation manager for the City of Meadow Lake, Meadow Lake Rocks is a great initiative.

“It’s really nice to see community members stepping up and taking the lead on these types of projects,” Beck said.

Beck went on to say the project should be an interesting one for local residents and tourists alike.

“I’ve heard about people taking these rocks from province to province and country to country,” he added. “It’s kind of like a letter in a bottle type feel. It’s a low-effort thing on the city’s part, but we support it and hopefully it is very successful.”