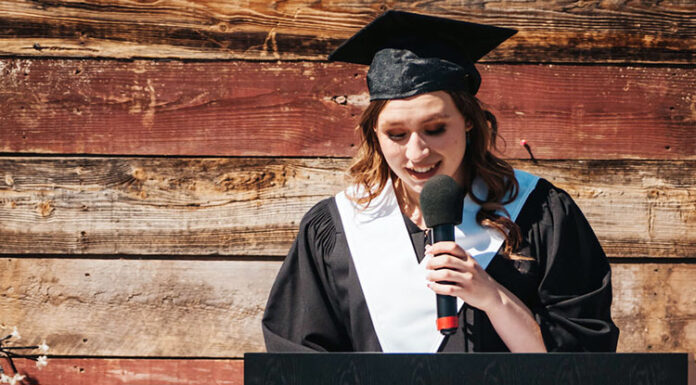 Saturday (May 29) marked the annual graduation ceremony at Goodsoil Central School, but it was a ceremony unlike any other in the school’s history.

“Our grad parents chose to stick with our traditional May graduation date,” explained Goodsoil Central School principal Karen Hofer. “We had many of our services already booked – our video screen, our sound system, our photographer, so we elected to stay with that date and go with a drive-in ceremony. We were lucky enough the weather cooperated.”

Goodsoil Central’s Class of 2021 included 10 graduates this year, and the drive-in ceremony took place right on the school grounds.

“We added a few things to our traditional program such as a thank you to parents and to the teaching staff, there were messages from the Northwest School Division and MLA Jeremy Harrison, as well as our trustee and superintendent,” Hofer said. “We had great feedback on the day – everything seemed to go very well.”

During the ceremony, the grads were stationed outside their vehicles in a ‘U’ shape in front of the podium. They had to remain a certain distance apart, while parents and other guests stayed in their vehicles across from the grads.

“Guests were able to view and listen thanks to our LED screen and the FM system on their radios,” Hofer said. “Each grad was allowed four vehicles to attend. It was very successful, but given how much of an unknown it was, we were a little nervous. In the end, however, we feel very confident we did a good job.”

This year’s valedictorian was Emma LaBrocca.

“This year has taught us to live more in the present, and experience each day just as it is because who knows what tomorrow will bring,” LaBrocca stated in her valedictory address. “Growing up has been a journey, but this journey we’ve taken during the last 13 years has made these next coming years exciting and new.”

As this year’s grads prepare to move on to the next stage in their lives, Hofer is optimistic a sense of normalcy will soon return to the Goodsoil school.

“I’m hoping we are back to a more traditional ceremony next year because we can have more guests,” she said. “Our grad ceremonies are more of a community event. We have a lot of community members who come out to the exercises as well as the graduation dance. It’s a celebration with the community and we miss that part. I had a great grad committee, so I do need to thank the teaching staff here. We pulled off something where there was a lot of unknowns… it went really, really well.”

Outdoor grad planned for CHS
Meanwhile, organizers of the upcoming graduation at Carpenter High School in Meadow Lake are confident the ceremony will be held outdoors.

“According to SHA guidelines, with distancing and things of that nature, moving outdoors allows for a little more flexibility with masks and so on,” noted CHS vice-principal Jesse Shakotko.

As for the CHS valedictorian, there will be two this year – Avery Pearson and London Perry.

“We picked two because, as of right now, we are planning to do two different ceremonies,” Shakotko continued. “We will be splitting the group, and it looks like we will be able to have two guests per grad.”

As for the ceremonies themselves, Shakotko said they will be held June 29 but logistics are still being worked out.

“It will probably be here at the school or at Lions Park,” he said. “We don’t have an exact time, but probably late morning and again in the early afternoon. Both ceremonies will be the same day and each ceremony will be shortened, allowing for time in between for one group to leave and the other to arrive and to set up.”

There are also plans to livestream the ceremonies via Facebook, because the grad committee would like to give the grads as much of a genuine, real experience as possible.

As for next year, Shakotko believes a more traditional ceremony will be likely.

“I always try to be optimistic about that, but we will wait and see,” he said. “It seems to be trending in that direction, but we will hope for a positive summer and for things to be even better in the future.”

This year’s Ernie Studer School graduation in Loon Lake is set for this Friday (June 4) while the Pierceland grad is scheduled for June 11.