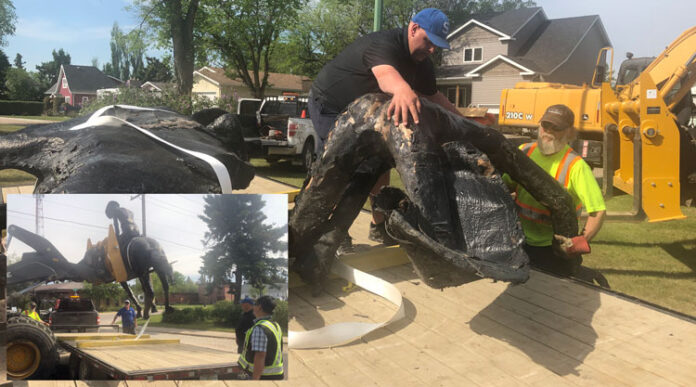 After more than a half-century, a familiar sight to Meadow Lake residents and visitors alike has ridden off into the sunset – at least for now.

This morning (June 3), the horse and cowboy statue located at the intersection of Centre Street and 4th Avenue was scheduled to be removed. It won’t be gone forever, though, as the statue has been shipped to a St. Walburg artist who has been commissioned to repair and refurbish it in time for next year’s 100th anniversary of the Meadow Lake Stampede.

“Regan (parks and recreation manager Regan Beck) phoned me one day and asked if I could possibly repair the statue,” explained artist Susan Velder. “He also said I had been recommended by a couple people who were familiar with my work.”

Velder, over the years, has completed a number of commissioned pieces including one located on the grounds of the University of Calgary, a life-size sculpture of artist Berthold Von Imhoff at the entrance to St. Walburg, as well as a statue of the Queen on the grounds of the Saskatchewan Legislature.

“It means a lot,” Velder added with regard to being hired to repair the horse and cowboy piece. “I am honoured the city would ask me.”

In 1969, the Meadow Lake Racing and Sports Association chose to have the statue built to honour the pioneers of the early Stampede. The statue of a cowboy in the old style of saddle bronc riding was crafted by sculptor Bill Epp of Saskatoon. The statue was completed in the spring of 1970 and installed for the 50th anniversary of the Stampede.

“While the 2020 centennial celebration of the Stampede had to be delayed because of the COVID-19 pandemic, the goal is to have this statue revitalized in time for the rescheduled 100th anniversary celebration in June of 2022,” noted city manager Diana Burton. “The statue will need to undergo significant repairs offsite… with a plan for it to be reinstalled in the spring of 2022. We are hopeful these repairs will see the statue continue to honour this important piece of our community’s history for years to come.”

This was echoed by councillor Richard Levesque who, after being elected to office, encouraged the city to explore ways of repairing the statue.

“The City of Meadow Lake has had a long history concerning the Stampede and would have had a 100-year anniversary in 2020,” Levesque said. “The city has very few historical sites, so it is important to maintain what we have. The statue has been neglected, weathered and vandalized over the years and requires a major face lift.”

Velder, meanwhile, said she also views the project as a way of honouring the original artist, Epp, who she met in 1986.

“Bill was very helpful to me,” she said. “I did a horse study and asked him to do the mould. His men did the mould, as – by 1986 – he had a foundry in Dalmeny near Saskatoon. He did the mould and was going to do the bronze, but he died. I have a real feeling for Bill. He was a very good friend and I missed him when he died. When this job came up, I felt, in honour of Bill, I really must do what I can to get this thing back into shape.”

Currently, Velder added, the statue is in “horrible shape.”

“The cowboy has lost his boot, as well as one hand,” she said. “It was built in 1970, which was more than 50 years ago, so it’s understandable things have deteriorated.”

As for what it will take to repair the piece, Velder said that is the big question.

“Bill was not a bronze man at that time,” she said, adding she will do what she can to repair the piece she believes was crafted from fiberglass and other materials.

Beck, meanwhile, reiterated how much of a link the statue has to Meadow Lake’s history.

“We’re excited about the prospect of restoring it to its former glory to not only honour the Stampede background here, but also the artist who originally built it,” he said. “It is also something Meadow Lake is known for – you see it on all our marketing material and so on. We want to make sure it looks as good as the community wants it to look. We’re very excited to get it done.”