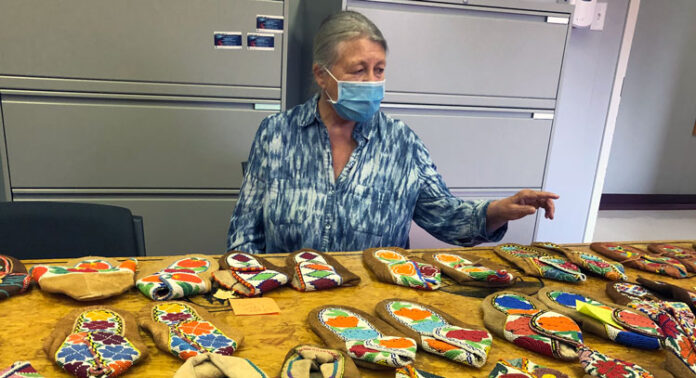 Artist Sandra Semchuk, who grew up in Meadow Lake and now resides in British Columbia, recently donated a boxful of moccasins to the Meadow Lake Tribal Council – traditional footwear that had made their way into her family’s possession as far back as the 1950s.

“I was born in 1948, and my uncle, Graham Pearson, had a store called G&E Men’s Wear on the main street while my auntie, Elsie Pearson, had G&E Ladies Wear kitty-corner to that,” Semchuk explained. “My family was next door to Uncle Graham’s place with Semchuk’s Red and White store. In the 1950s, what I remember as a child, was my uncle buying moccasins from women from different communities all across the North – places like Beauval, Canoe Lake and so on.”

Semchuk went on to say she can recall the moccasins being exhibited in her uncle’s store.

“There was a central hub in the middle of the store where his cash register was, and all around he would display these moccasins,” she said. “The moccasins were often fully beaded with specific designs to the areas they were from – the floral patterns from Patuanak, the more geometrical patterns of Catherine McCallum’s work. They were patterns handed down generation after generation, so there was a history. As children, my cousin and I would spend a lot of time admiring these moccasins.”

In the late 1960s, the Pearsons moved to Richmond, B.C. and the moccasins went with them. Years later, in 2007, Graham Pearson passed away and Semchuk became responsible for handling his estate.

“I always wondered if there were any moccasins left,” she said. “When there is something that holds such a bright spot in your heart from such a young age, you don’t forget.”

Semchuk said her now late husband, James Nicholas, searched for days, going through every box her uncle had so carefully stored and labelled. Eventually, he uncovered a box of moccasins – the same ones Semchuk remembered from her childhood.

It was such an amazing thing,” she said. “I asked his grandchildren if it would be OK if I kept the moccasins and they agreed. James and I were originally hoping to do a piece of art with them, as he and I did a lot of collaborative work. However, James died in October of that same year – very close to the time my uncle died – and he passed. I kept the moccasins, and ended up taking care of them from that time hoping to find the right way and the right time to bring them home.”

It took several more years for that “right way and right time” to come about, but it eventually did.

“Recently, I felt I needed to put a push on this to try to find a better way to take care of these moccasins or have someone else take responsibility for them,” she said.

In speaking with Isabelle Opikokew at MLTC, the idea was formed of possibly travelling the moccasins to the various area First Nations communities as a sort of exhibit, allowing as many people as possible to experience and enjoy their beauty.

“If this can happen, it would be nice as some of the patterns are so specific to the different communities,” Semchuk said. “It is an honour to bring these moccasins home to the Meadow Lake Tribal Council. I am grateful to the tribal council for taking on the responsibility for giving them life and purpose again. Given the kind of divide we have between First Nations and settler people across the whole country and the divide I grew up with in Meadow Lake, to be able to offer something back to the First Nations in appreciation for the opportunity to grow up on that land is pretty special.”

Upon seeing the moccasins when they arrived at the MLTC office, Opikokew said many feature designs that cannot be recreated.

“What makes me sad though is wondering if people appreciated this work at the time, or did people discount the work?” she remarked. “Most people would have exchanged moccasins and other work for food, as it would have been challenging times in the 1950s.”

Also on hand when the moccasins were delivered was MLTC senior health director Marcia Mirasty.

“You preserved these moccasins and, in doing so, have given us back a piece of our past,” Mirasty told Semchuk. “Thank you for having the foresight and vision to keep it all, to keep it in such great shape and to even have the generosity to give it back to our tribal council.”