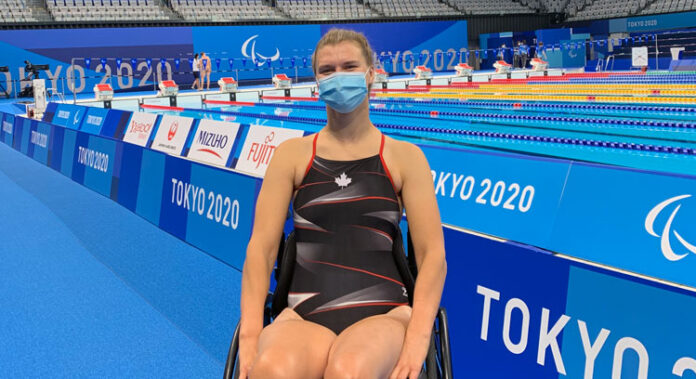 Nikita Ens has swam her way into the record books.

The former Meadow Lake resident broke a Canadian record when she took to the pool in Tokyo, Japan recently for the 2020 Summer Paralympics. In her first race – the 150-metre medley – Ens completed a 50-metre backstroke, followed by a 50-metre breaststroke and a 50-metre front crawl, finishing the race at 4:34.01.

“She swam one class up in the S4 category for both experience and training,” explained Ens’ mother, Monica. “Her overall time, however, is a Canadian record in the S3 classification.”

The next day, Ens swam the 50-metre backstroke and finished at 1:10.82, which proved to be a personal best by close to four seconds.

“She finished the race in 10th place and missed the finals, but still went as an alternate,” Monica Ens added.

Sunday night (Aug. 29), Ens swam the 100-metre freestyle and finished in 2:32.26 which was another personal best.“She was actually disappointed because her goal was to break the Canadian record of 2:27 and make the finals, but she ended up in ninth place and did not break the record,”

Ens herself was contacted prior to her return to Canada at which time she said she is very pleased with her efforts in Tokyo.

Ens, who now resides in Saskatoon, earned a provincial track and field championship for Carpenter High School in 2006 in the senior girls shot put event. She was also a regular swimmer and served as a lifeguard at the Meadow Lake Aquatic Centre before a motor vehicle collision just outside Meadow Lake in February 2014 left her confined to a wheelchair.

“Seven years from the day we were wheeling Niki out of rehab after being in the hospital for seven months – a time when she barely knew how to transfer herself from her chair to her bed – I am watching her compete at the Paralympics,” Monica Ens beamed. “It’s a bit surreal. We are so proud of her hard work and determination, her fight for independence, and the young woman she has become through all of this.”

Nikita Ens, meanwhile, said it was inspiring for her to meet other talented, resilient athletes from around the world.

“Whatever form your impairment takes – physical, visible, noticeable to others – each one has a unique challenge to overcome,” she said. “It makes me thankful for the encouragement I’ve had to meet and work through mine.”

As for future plans, the 2022 World Championships are in Portugal next year, while the 2024 Paralympics will be in Paris.

“I’ll take about one month off from swimming and then begin again, gearing up for these events,”she said.

She also said it’s been a blessing to connect and train with the Saskatoon Lasers.

“Coach Eric Kramer is very knowledgeable and very good at training his swimmers,” she said. “It’s an atmosphere of welcoming and encouragement for athletes and families.”