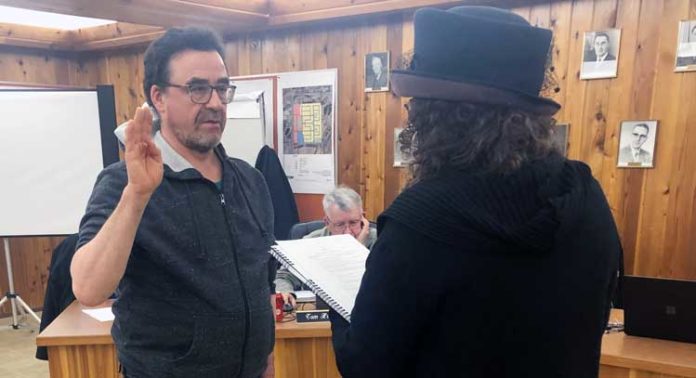 Marty Bishop is ready to make a difference.

This is how the newest member of Meadow Lake city council described the reasoning behind letting his name stand for what was originally supposed to be a May 25 by-election to fill a vacant seat at the council table. As it turned out, however, Bishop was the only candidate to come forward prior to last week’s nomination deadline, resulting in him earning the position via acclamation. He was officially sworn in during Monday’s (April 25) council meeting.

“I’m grateful for the opportunity to serve my community,” Bishop told Northern Pride. “I was a little surprised nobody else put their name forward, but I’m sure glad I did. There are some things that trouble me a little bit when it comes to our city, and I would like the opportunity to offer my insight and to hopefully be able to do something about these things.”
Bishop went on to say he considered running for council in the past, but felt – with the resignation for former councillor Richard Levesque earlier this year – the time was now right.

“I contemplated putting my name forward for the last municipal election a couple years ago, but felt perhaps it wasn’t the right time,” Bishop explained. “Since then, we’ve encountered a series of issues over here on the east side (pertaining to an unfinished road project) and I feel we’ve been sort of kept on the outside a little bit. That troubled me, and I felt I could possibly get on board and bring more information to residents in order to keep people in the loop.”

Bishop said, going forward, this logic could apply to any number of local matters.

“Sometimes, the difference between somebody being angry with someone is being able to talk to those people,” he said. “If there is dialogue and if there is conversation, a lot of things can be fixed. It goes a lot better if everybody knows what’s going on. Also, if you’re going to complain about something, you should be willing to also step up and help out.”

One of the first people to congratulate Bishop on his acclamation was mayor Merlin Seymour.

“First of all, I would like to thank Marty for putting his name forward to run for city council,” Seymour said. “It takes a lot of commitment to actively participate and be involved sitting at the council table. It was not an easy decision for me to put my name in prior to being elected, but I felt it would be an opportunity to give back to my community, while taking an active role in the future of our little city. I feel Marty has some of the same feelings, and will be a great addition to our current council.”

Seymour went on to say council is responsible for making policies and bylaws that will benefit the community as a whole, while being as transparent as possible to residents.

“Marty is a very well known and respected resident of Meadow Lake,” he added. “His honesty and integrity are two very important traits that will serve him well on his newly acclaimed seat on council. I look forward to working with him on our remaining term.”

Bishop, a musician who also owns and operates the local DJ service/audio business Sound Dogs, worked in the automotive industry for close to 40 years. Originally from Makwa, he and his wife, Val, have lived in Meadow Lake for several decades.

“That’s another reason I decided to run for council,” Bishop said. “I have some extra time, so why not try to devote that time back to the community? I’ve lived in Meadow Lake for all of my adult life, I’ve seen a lot of things – good, bad, happy, sad, all the things go along with a community – and now is the time to give back. I look forward to doing my part to help move the community forward.”