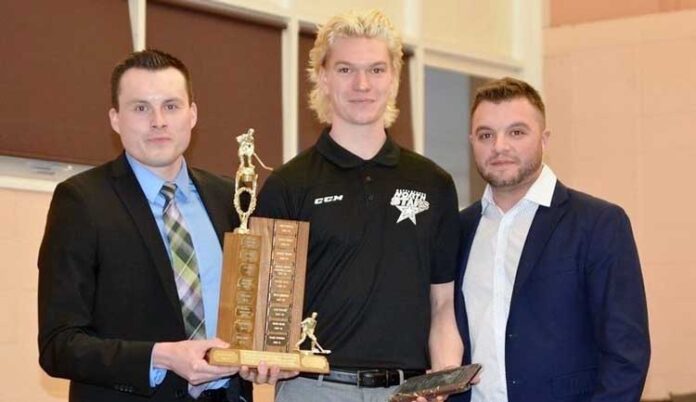 Meadow Lake’s Dylan Esau has capped off his junior hockey career in style.

Esau, who for the past four seasons played with the Battleford Stars of the Saskatchewan Junior Hockey League, laid claim to three prestigious prizes recently when the team held its annual year-end banquet.

“In addition to being this year’s top scorer, I was also named MVP as well as playoff MVP,” Esau told Northern Pride. “I didn’t know for sure I would be winning these awards until they announced it (at the banquet), but it’s always nice to be recognized by your teammates. (MVP Awards) are voted on by the players, so it’s great to know my teammates think so highly of me. It’s an honour.”

Esau, a forward, played in 57 regular season games for the Stars during the 2021-22 campaign, scoring 23 goals and earning 35 assists for a total of 58 points. During the team’s playoff run, Esau played in six games, earning four goals and two assists for six points.

“The year overall was pretty good,” Esau said. “Going in to the season, however, our team wasn’t expected to do very well, but I think we, as a group, put that aside and just did what we could. We ended the regular season in fourth place, which is pretty good. But, come playoffs, we ran into a hot team from Flin Flon. Still, it was a great year.”

Having completed his fourth year with the Stars, Esau will be moving on next season with plans to attend school and play college hockey in Red Deer.

“I grew up playing hockey in Meadow Lake,” Esau said. “It’s just always been part of my life. I’ve had the chance to meet a lot of new people over the years, and have just fallen in love with playing the game, improving my skills and creating great memories with my teammates.”

Among those who appreciates what Esau brought to the Stars the past four years is the team’s head coach Brayden Klimosko.

“Dylan is a guy who worked really hard since arriving here in 2017,” Klimosko said. “Nothing was ever given to him – he earned everything he received. Obviously he was relied heavily on, he was a great leader on the ice and in the locker room and a great individual overall.”

“His departure leaves a big hole to fill,” he said. “Hopefully the other guys who were here last season have learned from the experience of playing with Dylan, and from his leadership abilities which they, in turn, can pass on to their teammates next year.”