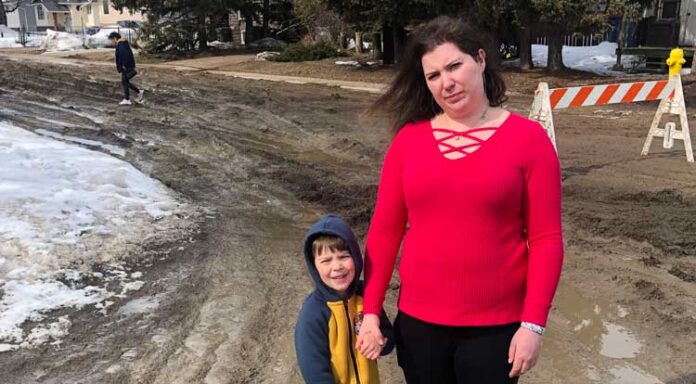 Residents of 3rd Avenue West in Meadow Lake will have to wait longer than expected for their road to be repaved after initially being torn up as part of a construction project more than six months ago.

According to city manager Diana Burton, even though gravel will be placed on the currently mud-filled stretch of road as a temporary fix, the street itself will not be paved until the 2023 construction season.

“Rusway Construction Ltd. replaced the water and sewer mains on both the 600 and 700 blocks (of 3rd Avenue West), and the storm sewer on the 700 block of 3rd Avenue West between August and November of last year,” Burton explained. “We do need the road to dry up before we can provide a fix, however, and we will add aggregate (gravel) when that happens. Unfortunately, in the meantime, it will remain closed save for local traffic. It will have to settle for a year and is planned for repaving next year.”

This is not entirely satisfying news for Fiona Redden and her family who live on the road in question. Redden told Northern Pride, having to travel through the mud when coming and going from her home has become more than an inconvenience.

“Back in the fall they wanted to redo the sewers and pipes and whatnot, so they went and dug up the road from 6th Street up to 8th Street,” Redden said. “To my understanding it was only supposed to take a couple weeks, and we had to park in the alleyway until the work was done. When the (sewer) work was completed, they filled in the road, put one layer of gravel down but then it started to snow – there was no chance to pave it.”

This was not an issue throughout the winter, she added, because the ground was frozen.

“But, with spring now here and everything melting, the surface of the road is pure mud,” she said.

Redden went on to say the road has been filled with a sea of sloppy mud for about two weeks now, adding it’s becoming worse as more local traffic drives up and down the street on a continual basis.

“There’s a lot of grooves in the road now, a lot of ruts,” she said. “We come and go from the house frequently for work and other reasons, and we only have one vehicle for three people to go to where they need to go. Every time I have to drive on the road, I’m afraid I’m going to get my vehicle stuck. I haven’t yet, and – to my knowledge – no one has, but it does cause a lot of mud to build up in our tires. There’s also a lot of mud and dirt getting all over our vehicle itself.”

Redden also explained how delivery vehicles avoid 3rd Avenue West, and how she is now required to collect packages from the post office which normally would have been delivered straight to her front door.

“I asked the city what they could do to help,” Redden continued. “They apparently have graded the road, and I do know they need to wait for it to dry up before they can do anything significant. I’m just not sure why they can’t put gravel or something down for now, though, just to try to make it a little easier.”

According to Burton, to add gravel now would be a waste.

“It would just get pounded out – we need the road to dry,” she reiterated.

Meanwhile, Redden said her family is using more gasoline because of the extra effort required for their vehicle to push through the mud.

“Compensation (from the city) for that would be nice, or even a simple car wash,” she said. “But, with so much mud getting up and under these vehicles, I don’t know if that would do much. I’m more worried about the tires and all the mud getting stuck up inside. It’s also causing mud to be tracked into our home, which means a lot more cleaning.”

Redden also said the continued use of the alleyway behind her home does not offer much in the way of an alternative at this time of year.

“We haven’t done anything with our backyard all winter,” she said. “If we were to start using our alleyway, we would need to dig out the backyard. At this point, unless someone gets stuck or it gets dangerous, we’ll have to keep using the road. It would be a lot harder to dig out the yard in order to get to the gate.”

Redden also shared her belief the water and sewer project should have been started earlier in the year so there would have been enough time to complete the job before the snow arrived. She also believes there should have been a contingency plan in place just in case the work could not be completed on time.

“Residents are quite concerned and understandably so,” Burton said.