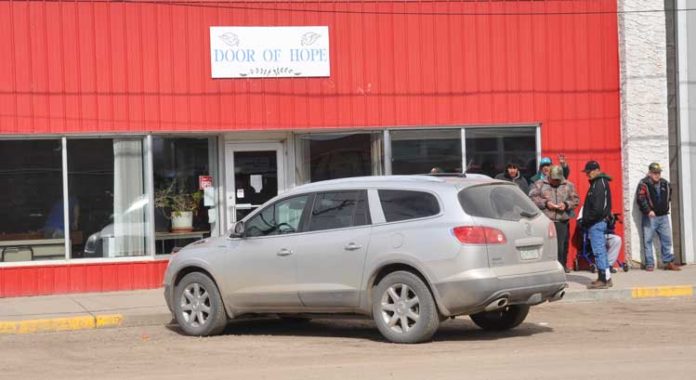 The Meadow Lake Co-op continues to invest in the local community, most recently through increased deposits at the Door of Hope food bank.

“We have been receiving donations from the Meadow Lake Co-op for years,” explained Door of Hope executive director Natanis Bundschuh. “They have always given us their bakery items, usually about the day before the ‘best before’ date. Recently, however, we had some of our board members, and I met with them as well, speak with management at the Co-op regarding the possibility of the store putting all of its outgoing food items toward local food rescue.”

Bundschuh went on to say, in the past, Co-op would send many of its food items to a reclaim centre in Regina.

“We asked if they could find a way to keep those donations more local, and they agreed,” Bundschuh added.

According to Meadow Lake Co-op general manager Caralee Strome, the reason the organization was so willing to take the Door of Hope up on its suggestion is a simple one.

“Co-ops are about community,” Strome said. “Our community supports us and we, in turn, support our community. Before Christmas, we made a large donation of non-perishable items to the Door of Hope food bank. We were happy to be able to help individuals who needed some assistance. A few months ago, we were contacted by one of their volunteers to see if we could help with more donations. After some discussions, we are happy to be able to provide additional items for those in need. It’s about people helping people.”

Bundschuh said there were some logistics that needed to be worked out on Co-op’s end, but those have been sorted out and the increased donations began to pour into the Door of Hope last week.

“It’s great to acknowledge the Co-op’s increased contribution,” Bundschuh noted. “We’re quite often scrambling to find canned goods and pantry items to put into our hampers, and this will go a long way toward helping us to address an important need in our community. It also has the potential to be pretty huge. Last year we started to weigh the groceries we were sending out the door, but we have always weighed the groceries coming in. Last year, Extra Foods donated approximately 115,000 pounds of food and other goods to us, while Co-op – by just providing the bakery portion – donated 14,000 pounds in the same timeframe. They were roughly donating about 10 per cent of what Extra Foods was donating. Now, I’m thinking we have the potential to double that.”

Meanwhile, the Door of Hope is also set to receive another assist, this time from Flying Dust First Nation.

According to Bundschuh, Flying Dust members read a recent story in Northern Pride describing an upcoming renovation project at the food bank and offered to contribute.

The Door of Hope has been awarded grant money to replace both the flooring and shelving at the food bank, and Flying Dust has agreed to help complete the project by doing all the necessary drywall work free of charge.

“It’s a donation from them to our organization,” Bundschuh said. “It’s so encouraging because we didn’t even ask them. They saw there was a need and knew they had the ability to address that need, and the stepped up. Flying Dust has been just amazing to us.”