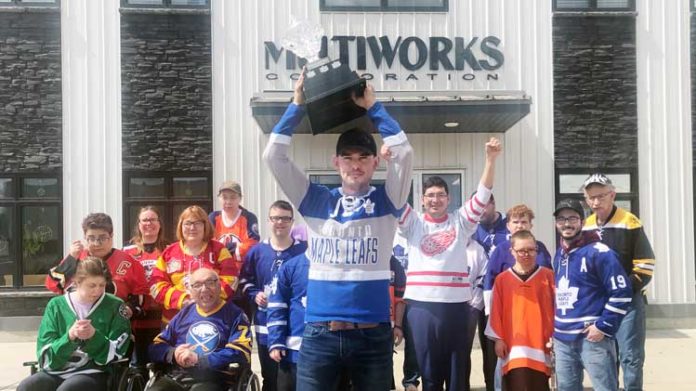 National Hockey League (NHL) playoffs may still be underway, but, as far as Multiworks Corporation in Meadow Lake is concerned, a champion has already been crowned.

Last week, Multiworks announced local resident Matthew Gardiner as the winner of the 2021-22 Multiworks NHL Draft, an annual fundraiser that continues to gain popularity throughout the community and beyond, and which serves an important purpose for Multiworks’ clients.

“This is our third year doing the hockey draft,” explained Jesse Ramshaw, associate director of residential and behavioural supports at Multiworks. “It’s an annual fundraiser to earn money for our clients to go on various trips. We’ve done Florida trips in the past with visits to Disney World and Universal Studios. COVID-19 prevented us from going on any trips these last few years, but we wanted to keep the fundraising efforts going because the money earned will still go toward future vacations.”

The recent draft, Ramshaw added, saw close to 225 people enter teams for the 2021-22 NHL regular season.
“It was a pretty good roundup and fairly average to what we’ve seen in past years,” he added. “We’ve stayed pretty close to that number. The draft itself started in October and finished in late April.”

As for the format of the draft, Ramshaw said there was a system in place whereby each player selected for an individual participant’s “team” earned one point for every goal they scored and every assist they made during the regular NHL season.

“For goaltenders, it was a little different,” Ramshaw added. “For wins, they would get two points and for a shutout they would get an additional three. You had to base your selections on who you thought would score the most goals, make the most assists and which goaltender would get the most wins and/or shutouts. It’s a bit of a guessing game because you never know who will be injured and who won’t be, and there’s a lot of unpredictable things in between.”

Although the competition has been fairly close in past years, Gardiner took the top spot this season by a 21-point margin.

“All things considered it was still very tight, but there was enough of a buffer we were fairly confident we knew who the winner would be,” Ramshaw said.

“All year I was pretty much leading, so it was kind of expected,” he said. “However, at one point, someone did get ahead of me so I didn’t know for sure.”

Gardiner also said the majority of his lucky picks came down to just that, luck.

“I’m not really an avid fan, at least not enough to know every player to this extent,” he said. “I just looked at the NHL website, did some research and made my picks. What matters most is how great it feels to know I was able to help out the people at Multiworks.”

Ramshaw, meanwhile, said the draft will return next fall.

“Prepare for a fourth draft to get underway next season.” he said. “We’ll be back at it and we’ll see if Matthew can hold on to the championship or not.”