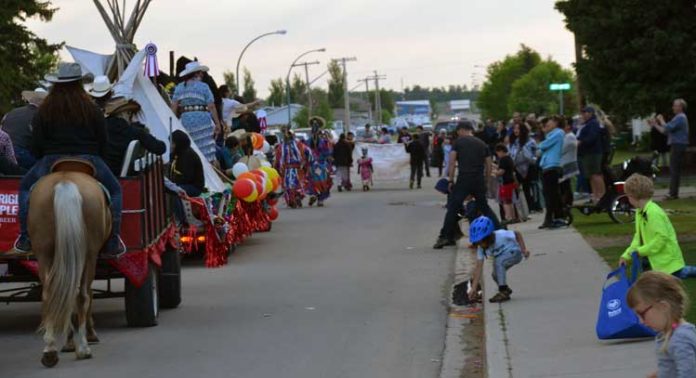 The ever-popular event was a casualty of the pandemic in 2020 and 2021, but it’s all systems go for it to roll through town on the evening of Monday, June 6.

“The theme of this year’s parade is, ‘The Little Cowboy in All of Us,’” stated parade chairperson Renée Marshall. “Personally, I find it tough each year to find a theme everybody can aspire to. This is an easy concept for people to implement, and opens it up to everybody.”

Marshall also expressed how excited she is for the parade to return for the first time since the pandemic began.

“I can’t speak for the community as a whole, but, from a Stampede Association perspective, I believe it was just taken for granted the parade was something that always happened in Meadow Lake each June – or each July years ago,” she said. “But, when all that went kaput, people started to realize what they were missing. I believe this has led to this year’s parade meaning that much more. People have come to realize not to take it for granted anymore.”

The parade will kick off Stampede Week 2022 and organizers are looking forward to the many entries that always includes fancy horses, colourful chuckwagons, youth group floats and an abundance of local businesses participating.

“If people wanting to enter before entries were even open is an indication, yes, entries will be high,” Marshall said. “We didn’t even have an entry form ready or any posters up, and people were already phoning to ask how they could sign up.”

Potential parade participants can register their entries at the Meadow Lake Library either in-person or by calling 306-236-5396.

The parade itself will begin at 7 p.m. at the Meadow Lake Stampede Grounds sparking lot, and will follow a similar route as past years. Rosettes will also be awarded for various categories.

Also looking forward to the return of the parade, as well as Stampede Week in general is Stampede Association member Terry Villeneuve.

In addition to the parade, Stampede Week will also include an installation ceremony for the restored horse statue on Centre Street, the annual District 36 4H Show and Sale, two nights of PBR bull riding and a dance at the Meadow Lake Civic Centre. There will be no indoor rodeo this year.

“It’s very exciting for the community to get back to these things, and we are glad there’s a lot of activities going on in the community during the annual Stampede Week,” Villeneuve continued. “We’re hoping for nice weather all week long.”

“It may not be exactly as everyone remembers it, but, hopefully, it will still be a good turnout and people will enjoy the events,” she said. “It will be good one way or another, as long as it doesn’t pour rain.”