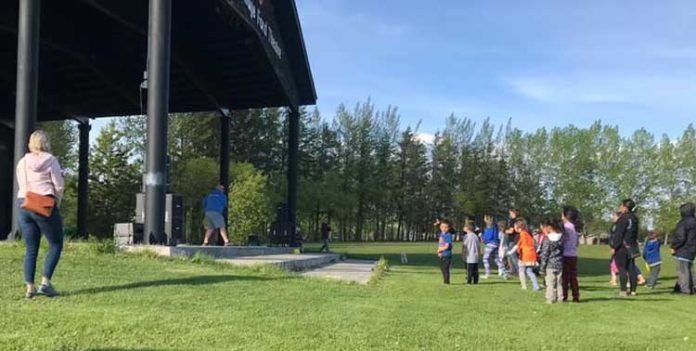 Regan Beck believes Meadow Lake is up to the challenge.

The city’s parks and recreation manager was one of hundreds to flock to Lions Park last Wednesday evening (June 1) for a kick-off celebration for the ParticipACTION Community Better Challenge.

“This challenge is focused on getting people out and getting them to be more active,” Beck explained. “It’s similar in a lot of ways to when we did the In Motion Go Out and Play Challenge back in February 2021. The biggest difference is, while the In Motion initiative was a provincial challenge, this one is a national challenge. In Motion was also for only 10 days while the ParticipACTION challenge is for the whole month of June. Other than that there is a lot of similarities.”

“Based on our history with the last one, I think we can go out and do it again,” Beck said while reiterating the fact Meadow Lake was the winner of the In Motion challenge in 2021.

He also said, given the fact the current challenge is being held in June opposed to the middle of winter, it should bode well for more people becoming involved.

“Absolutely, that’s for sure part of it,” Beck said. “One of the driving factors is people are already out there doing things. It’s just a matter of getting people to track all the physical activity they’re doing. We’re a very active community, which is great, and we would like to take advantage of that.”

“It was a big crowd,” Beck added. “Close to 400 hamburgers and hot dogs sold at the food booth alone, while there was also a bouncy castle set up for the kids, the humane society had some of their animals up for adoption there, while outdoor Zumba and other attractions took place throughout the park. There was a lot going on.”

If Meadow Lake is successful, Beck also said the prize money will go toward a worthwhile cause.

“I’m not at liberty to say what that is just yet,” he said. “We’re not at the point where we’ve decided where to put that money. On the parks and recreation side, there are endless opportunities, however. With the In Motion prize money, we purchased lights for the park, lights that will be installed shortly. This time, we’re in the midst of a couple big projects so we will wait to see where things go.”

He also reinforced his belief Meadow Lake has what it takes to come out on top.

“Our ability has been proven,” he said. “Looking at the leader board right now (Day 2), we’ve already moved up to fourth place in Saskatchewan. I believe once more people come on board with this, download the app or go online, our numbers should take off.”

He also said residents should be made aware physical activity does not simply include working out.

“It can include everything from working in your garden, walking your dog, mowing your lawn, all these things – physical labour of any kind,” Beck said.

Also excited about the city’s involvement in the challenge is mayor Merlin Seymour.

“My opinion on how the importance of this is two-fold,” Seymour stated. “The primary focus would be to get people active in the community by using any and all of the facilities the city has to offer.”

Seymour went on to note, if Meadow Lake is fortunate to win the contest, he would be confident the prize money would be used to even further enhance the recreational opportunities within the local community.