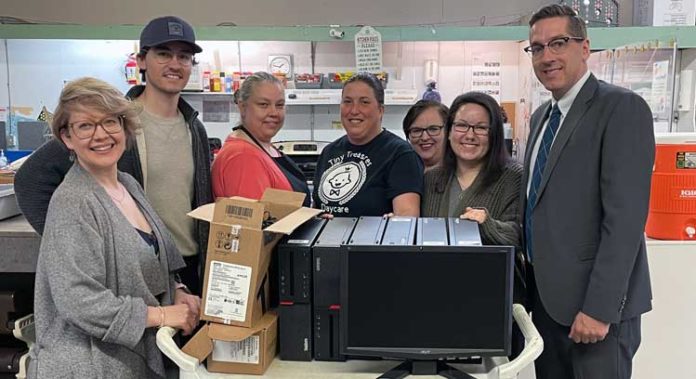 Donations can come in all shapes and sizes.

Just ask Natanis Bundschuh, executive director of Meadow Lake Outreach Ministries and the Door of Hope in Meadow Lake, who is still beaming about a series of community donations she believes will go a long way in helping her organization help others.

One such donation came recently in the form of $3,000 presented to the Door of Hope by the Knights of Columbus’ Saskatchewan Charitable Foundation.

“The Knights of Columbus are very generous to us and, every year, they take extra measures to make sure we don’t miss our deadlines to applying for grants,” Bundschuh explained. “This year, they donated $3,000 which will go toward the cost of running the food bank, as well as the soup kitchen and so on. It really helps to get those cash infusions throughout the year.”

Meanwhile, North West College made a donation of its own recently in the form of six desktop computers.

“This was of particular interest to me because one of my goals this calendar year was to get new desktop computers for every department in the ministry,” Bundschuh said.

According to Eli Ahlquist, president and CEO of North West College, as a community focused organization, the college strives to provided services and support to the community when needed.

“Our IT department was in the process of updating our internal systems, and we had some lightly used computers that were no longer required”, Ahlquist noted. “What better way to support a local charity then by helping them to offset the cost of this investment?”

“I am amazed at how generous and thoughtful our community partners are toward us,” she said.

Another recent donation was made by Color Collision.

“We approached them and asked if they would repaint the doors on the Hope Centre because they’ve received a lot of wear and tear over the years,” Bundschuh said. “Some board members came over, sanded them down, prepared them, and then took them to Color Collision where they were painted with automotive paint so they will be very durable and last a long time. They did an amazing job.”

Other recent and ongoing donors include Francis Legal Services which donated a copy machine, the Flying Dust Market Garden which provides potatoes throughout the year as well as a variety of produce in the summer and fall months, Pat Morley of Willow Creek Community Garden who donates fresh herbs, fruit and vegetables from the community garden, and Lydia Dancy who offers fresh baking regularly. Meanwhile, Extra Foods donates more than 112,000 pounds of food and goods each year, the Meadow Lake Co-op donates more than 15,000 pounds of food each year and Giant Tiger donates all of its outgoing stock.

Bundschuh went on to say community donations helps her organization out in the long run.

“Now we don’t have to be out the cash to get the results we were after,” she stated. “Our community partnerships have really impressed me in the past year… they have been growing while the generosity has been increasing as well. And, it’s beneficial on both sides, If an organization has items it no longer needs, it can pass them on to another who does need the. It’s recycling at its best.”