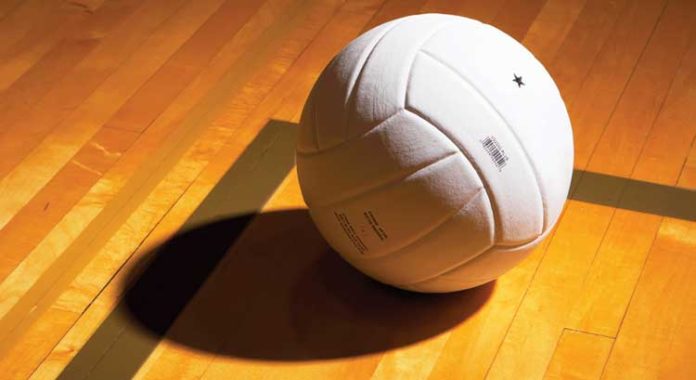 A week off didn’t cause the Carpenter High School boys volleyball ‘A’ team to lose a step.

The squad finished third overall at a tournament hosted by Carlton Comprehensive High School in Prince Albert this past weekend. The action kicked off Friday (Oct. 14) and continued throughout the day Saturday (Oct. 15).

“It was a really good showing,” remarked CHS boys volleyball coach Cheyne Dallyn. “It was one of our best weekends, with a full team effort. The boys worked hard and finished first in our pool defeating Osler, Bellevue and one of the Carlton teams.”

This landed CHS in the playoff bracket where they faced John Paul II Collegiate from North Battleford in the quarterfinal. The Spartans were victorious, advancing the the semi-final round to meet Carlton.

“We lost that one in two sets, but recovered to defeat St. Mary Catholic High School from Prince Albert in the bronze-medal match,” Dallyn said. “Everyone gave it their all, particularly Nait LaBrash who was very consistent for us all weekend. He was quick on the gun for us and really pumped the boys up. Another player who really brought it this weekend was Lucas Flanagan. He had a great weekend, as did Evan Arnott.”

Next up, the boys will compete at a tournament this coming weekend in Edmonton.

“It’s a big one – one of our biggest of the year and one of the most competitive,” Dallyn said. “We hope to make our way into the semi-finals, but we will have to play our best ball in order to do that. It’s all we can ask for right now, to try to make the semi-final, because all the teams that will be there are fantastic. It will be a great challenge to see where we’re at.”

Meanwhile, the CHS girls volleyball ‘A’ team was also in action this past weekend.

“The senior girls travelled to Moose Jaw where they faced some tough games,” noted CHS girls volleyball coach Desirée Klarner. “The girls played well, but lost some key games that sent them to the consolation side of the bracket. Saturday the girls really came together and won three games straight to win the consolation side. In their final games, they beat Lumsden, Moose Jaw Central and Regina Riffel.”

Klarner said winning the consolation side was no easy feat.

“Beating a 5A team in the final is a huge accomplishment,” she said. “I am always impressed by our team’s resiliency and each weekend they get better.”

Coming up this weekend (Oct. 21 and 22), the CHS girls will be in action in Meadow Lake for their annual home volleyball tournament. The event will feature five other teams including the CHS ‘B’ squad as well as Makwa Sahgaiehcan, Carlton Comprehensive, Macklin and John Paul II Collegiate.

“We are looking forward to matching up against JPII again, as this is the first time we will see them since the start of the season,” Klarner said. “This is a team we will always have to beat at regionals when we host them Nov. 12.”