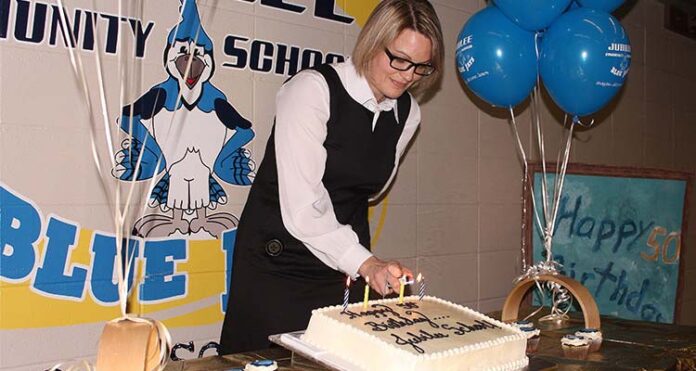 It was a golden day Nov. 25 as community members celebrated the deep history of Jubilee Elementary School in Meadow Lake.

In spirit of the school’s 50th anniversary, staff and students arrived for the day dressed as if it was 1965. And, just like 50 years ago, a special assembly was held to commemorate its service to the community.

Back then, Jubilee – which was named in honour of Saskatchewan’s Diamond Jubilee since becoming a province – was known as a stunning piece of architecture for its round design. A newspaper article at the time states, at its grand opening in November 1965, government officials hoped the school would allow future generations to successfully meet the complex problems and ever-changing demands of the space age.

“This building has been part of Meadow Lake for 50 years and has made a very positive impact for our community,” current Jubilee principal Darryl Pearson said. “I look at it and feel honoured, particularly thinking of the legacy of Jubilee and being part of Jubilee at this time.”

The round-style school was the first to be built in Saskatchewan and cost close to $260,000. On opening day, 293 students were enrolled between Grades 5-8  and were taught by a staff of 10 teachers. Meadow Lake resident Tom Gray was a Grade 6 teacher during the inaugural year and remembers how eager he was to be in front of a chalkboard.

“I was 19 years old and I was pretty excited about it,” Gray remarked. “It was the first classroom I had in my career. I really enjoyed that first year.”

Gray went on to say how happy the new staff and students felt to be in a new school. Before the 1982 addition, the gymnasium was in the space the current library occupies and staff always tried to use the circular area because students enjoyed it.

“I can’t imagine it’s been 50 years because it certainly doesn’t feel that long,” Gray said. “I see the school today and I’m proud of the fact they’ve kept it. It looks almost as good as the day it was built.”

Jubilee teacher Cara Ludwig also has fond memories of the school. She was a student there between 1993-1998 and her grandmother, Margaret English, was also one of the school’s first teachers. Now that Ludwig’s on the other side of the desk, she said there have been many changes since her time as a student such as better outdoor equipment, more after school activities and a new family centre.

“It still has that homey, welcoming vibe it always did,” Ludwig added. “They did a lot of updates and kept up with the times.”

As for Jubilee’s unique design, Pearson said interest has largely waned and students don’t seem to appreciate the architecture like they once did. But, he added, the special attribute isn’t forgotten.

“We find sometimes when people come into the building – because it’s round – they get confused and sometimes get lost in the circle and they may have to do another lap before they find where they need to go,” Pearson noted.

The Nov. 25 festivities ended with students and staff coming together for cupcakes and to sing Happy Birthday. A come and go tea was held in the evening where attendees enjoyed a piece of cake.