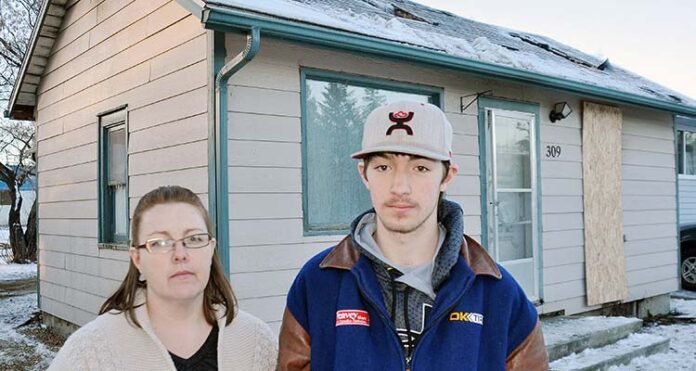 It wasn’t the happy New Year Meadow Lake resident Shawna Lumgair and her son, Arlan, were hoping for.
Shortly before 12 noon Jan. 1, the Lumgairs lost their home and most of their possessions when their house went up in flames.

“I was on my way out of town to pick up Arlan from a friend’s place,” Lumgair explained. “I left around 11:45 a.m. and was just on the other side of St. Walburg when the police called to confirm my address and to tell me my house was on fire.”

After making alternative arrangements for her son to be picked up, Lumgair turned around and raced toward home.

“I definitely broke a few speed limits because I was back by about 12:45 p.m.,” she said. “When I got back, firefighters were on scene.”

According to Meadow Lake fire chief Neil Marsh, the call would have come in shortly after Lumgair’s initial departure.

“A neighbour called it in when smoke was seen coming out from under the eaves,” Marsh said. “The fire started in the basement, came up through the walls and into the attic. It caused considerable damage.”

Marsh went on to say the blaze, which started as a result of a mechanical failure, was not suspicious.

“We often respond to more fires during the winter months when there’s more energy flowing through houses, and during the holidays when a lot more things tend to be plugged in,” Marsh noted. “In this case, however, it was simply faulty wiring.”

Lumgair, meanwhile, described her reaction to the news as one of absolute shock.

“What’s frightening is I didn’t smell, see or hear anything out of the ordinary,” she said.

In the days following the fire, the Lumgairs have received numerous donations from members of the Meadow Lake community and beyond. Lumgair’s niece, Mikayla Myette, set up an online fundraising site that – as of press time – generated more than $5,700.

“I want to do whatever I can so she doesn’t have to struggle,” Myette remarked.
Myette’s original goal was to collect $5,000 through gofundme.com, but when that number was quickly surpassed she increased the goal to $10,000.

“We’ve also taken numerous donations of clothing and household items,” she added. “We’re running out of space to store everything, so we’re mostly asking for cash donations right now.”

Martodam’s The Clothing People has also set up an account to allow customers to transfer their store credit to Lumgair so she can access it to purchase new clothing.

“The support has been unimaginable, it’s been unbelievable and so humbling,” Lumgair said. “I know we’re blessed to have so many people care about us – friends, family and even total strangers. All I can say is thank you.”

As for the future, Lumgair expected to meet with her insurance company this week. In the meantime, she and Arlan have been staying with her sister and her family.

“We’ll be looking for a place to rent until things are cleared up and rebuilt,” she said. “We definitely want to stay in town.”

Lumgair owned the house for more than 10 years. While not much was salvageable, Lumgair did manage to save a few keepsakes including a kitchen table that once belonged to her grandmother.

“We were able to save some of Arlan’s rodeo memorabilia including the numbers he’s worn at various events like the Calgary Stampede,” she noted. “They’re a little smoky and nothing we saved can be reused, but I’m glad we still have them. I’m also very happy the fire department thought to save my grandmother’s table. Everything they, and others, have done for us has just been amazing.”

Meanwhile, Meadow Lake Fire and Rescue also kept busy during the holidays when, on the evening of Dec. 27, firefighters responded to a garage fire on Flying Dust First Nation. The garage belonged to Mike Bear and, according to Marsh, the fire was caused when a wood stove located inside grew too hot.

“We received the call around 4:55 p.m.,” Marsh said. “Luckily there were no injuries and there was no damage to the nearby house.”