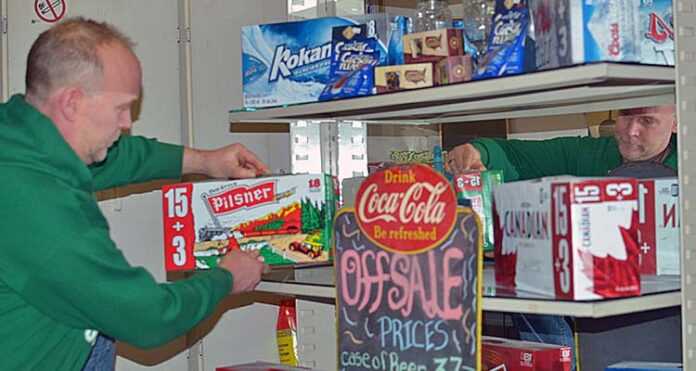 Motorists heading to and from Meadow Lake on Highway 4 now have another reason to stop at Moose Country Lodge and Service.

According to a group of concerned Glaslyn and area residents, however, the store’s new off-sale liquor service has to go. Recently, the business – located about 60 kilometres south of Meadow Lake – acquired a permit to sell booze through the Saskatchewan Liquor and Gaming Authority.

“It’s a temporary permit,” explained Keith Graham, the new owner of Moose Country Service. “I have to go to a hearing April 21 because there are some people from the Glaslyn area who are protesting the fact we now sell alcohol.”

Graham, who also owns the A-Line Motel in Glaslyn, took over the Moose Country business Dec. 1, but said the application for an off-sale permit had been in the works for about 18 months prior to when the opportunity to provide such a service in the RM of Parkland was advertised by the province.

“ A bid process for an off-sale in the RM of Parkdale took place in spring 2014,” explained Stephanie Choma, a spokesperson for SLGA. “There was no off-sale in the RM at that time. Interested parties could submit a sealed monetary bid in order to obtain the off-sale and the successful bidder for that particular location was Keith Graham. There were a total of 12 off-sale endorsements up for bid around the province at that time.”

Once awarded, Graham had 18 months to meet SLGA requirements in order to begin selling under the off-sale endorsement.

“I really believe there’s a demand for it,” Graham said. “Especially from people living on the east side of Turtle Lake. It’s convenient because we’re located along the way to the lakes.”

“Under the new liquor retail system announced by the provincial government in November 2015, liquor retailers currently operating as SLGA stores, franchises, off-sales and private stores will all operate under the same retail permit and operating parameters,” Choma added. “Additional retail permits will be based on population criteria and awarded through a request for proposal process. Details of the RFP process are currently being developed, but implementation of this new liquor retail system will not begin until after the April 2016 provincial election.”
As for the upcoming hearing, Graham remains confident the SLGA will rule in his favour.

“There were only three signatures on the petition I saw that belonged to RM of Parkdale residents,” he said. “The rest belonged to people from other communities.”

He also said, if his licence is revoked or if a permanent licence is not eventually issued, it would be unfair considering very few people walk to any liquor store when purchasing alcohol.

“Whatever it says in that petition doesn’t change the fact 90 per cent of the people who shop and other liquor outlets in Saskatchewan also drive to and from these locations,” he added.

Meanwhile, the Meadow Lake chapter of Mothers against Drunk Driving (MADD) received a letter of concern recently about the availability of these off-sale products.

According to the letter, having an off-sale outlet located 15-20 minutes away from the nearest community promotes drinking and driving. MADD president Nicky Munroe, however, would not say whether her group agrees or not.

“We chose to forward the letter on to MADD Canada and ask them to deal with it,” she said. “We didn’t want to address the issue ourselves because we’re not sure what our stipulations are.”