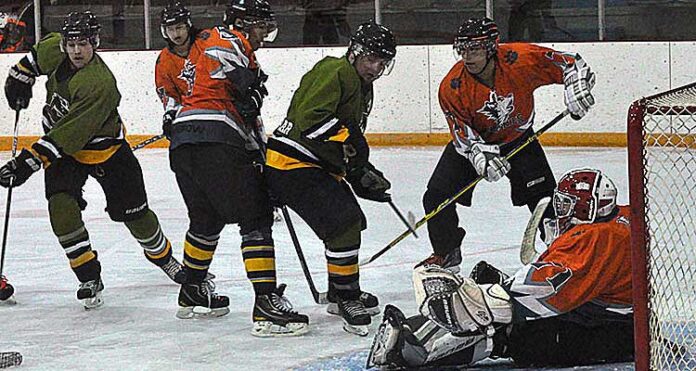 The Broncos, who finished the 2015-16 regular season in first place with a record of 15-1-0, are scheduled to face the eighth-place Moosomin Warriors in the first-round, best-of-three series starting this Friday at PineRidge Ford Place on Flying Dust First Nation.

“Overall, we had a productive regular season with the lowest goals against per game at 2.6 over 16 games,” explained Broncos head coach Darryl Worms. “We really learned how to play a tight defensive style game while getting contributions from all four lines up front.”

Worms believes the depth of the team’s roster will play a big role in how far the Broncos are able to go in the playoffs.

“The playoffs are always exciting and every team has a chance to win – it’s a fresh start for everyone,” he said.
Veteran Broncos player Ray Ross agrees, adding it’s important not to underestimate their first-round opponents in spite of what the regular season shows.

“We’re looking forward to the opening round,” Ross said. “I’m wondering if they’ll pick up a few players – perhaps a few guys with Junior B or other hockey experience – because, when it comes to playoffs, it’s a whole new ball game. They’re sure to have a fairly solid lineup, so I’m personally not going to look too far ahead just yet. We’ve made that mistake before.”

This is the fourth season for both the league and the Broncos, and the Meadow Lake squad has yet to add the BLHL Championship to its list of accomplishments. Even though the team’s plan is to focus on one game at a time, Ross did admit there’s a lot of optimism the Broncos could finally go all the way.

“We have four very deep lines right now – there aren’t too many weak links in the chain,” he noted.

Recent action
This past weekend, the Broncos capped off the regular season with back-to-back victories over the Leoville Huskies. Saturday’s outing, played at the Meadow Lake and District Arena, saw the Broncos emerge with a 13-2 win. Scoring for Meadow Lake were Adam Merasty with the hat trick, Ross,  Ashton McIntyre, Randy Lariviere and Brody Brooks each with two goals apiece and single tallies courtesy of Zane Morin and Chris Nault.

The following night, in Leoville, the Broncos skated away with a 14-3 victory.

All eight BLHL teams, meanwhile, have qualified for playoffs with the opening round for each squad kicking off this Friday (Feb. 5). In addition to the Broncos hosting Moosomin, the La Ronge 89ers will challenge the Whitefish Flyers, the Big River Braves will play host to Leoville and the Muskeg Blades travel to Birch Hills to take on the Blackhawks. Game 2 of each series will take place Saturday with Game 3, if necessary, following thereafter.

The second round will also feature a best-of-three format while the final will be best-of-five. Based on the standings at the end of the regular season, the Broncos believe there’s a strong possibility they could meet the second-place Braves in the final.

“I really hope that’s how it works out,” Ross said.