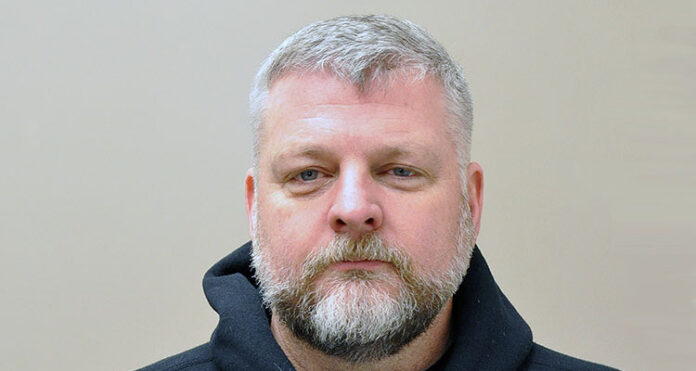 With a background in wrestling and a determination to do the right thing, Meadow Lake’s Chris Brownrigg serves as an inspiration for young athletes looking to break into the sport. Recently, Chris spoke to Northern Pride about coaching, his volunteer work and his love for old cars.

Q: How did you become involved with the Northern Pikes Wrestling Club?
A: About three years ago, when we moved to Meadow Lake, I met Jason Guenther who was the head coach of the Carpenter High School and Northern Pikes wrestling teams. He asked if I’d be willing to help out because they’re always kind of short when it comes to coaches and volunteers. This year, Jason is away in France on a family trip, so both teams needed someone to step up and help out even more in his absence. I coach the high school team alongside Matt Quesnelle and Tyson Moss. The club paid for me to complete the national coaching certification program. I’ve done my training and now just need to do my evaluation to be considered certified. That will happen later this year.

Q: What’s it been like stepping into more of a leadership role?
A: It’s been fun watching the kids develop and seeing their excitement when learning new moves. To see them succeed and to see how they handle defeat has also been a pleasure. They’re great kids and their parents have also been quite supportive.

Q: What sort of age group is wrestling open to?
A: Our base level is eight years old for the Pikes. The club goes all the way up to U19 and includes some of the same kids who are on the high school team.

Q: Do your coaching techniques vary depending on how old the athletes are?
A: This year we’ve actually tried something different. We’ve divided the club into three weight categories. Wrestling is a sport based on weight and size. That being said, it was a lot easier to create lesson and practice plans that were both age and skill appropriate. As a coach, the number one thing for me is safety. The kids’ victories are a nice cherry on top, but safety, learning and developing good sportsmanship are all things I’ve set as goals.

Q: How big are the tournaments the wrestlers attend?
A: Wrestling, in Canada, can go all the way to the Olympic level. Wrestlers as young as eight years old are able to compete at the provincial level whereas the cadet, juvenile, junior and senior categories also have national events. This year, the cadet and juvenile nationals are being held in Calgary in April. This past weekend, a number of our wrestlers competed at the Golden Bear Invitational tournament in Edmonton. That event had somewhere in the area of 15 wrestling mats and ran matches all day long. Our wrestlers competed against athletes from Saskatchewan, Alberta and B.C. It was the largest tournament we’ve attended this year.

Q: Tell me about your background in the sport.
A: I wrestled in high school. I had my share of successes, but the greatest opportunity I had was wrestling my buddy, Eddie Sernoski. He went on to become a national level athlete who represented Canada at the Commonwealth Games. In the 1980s, he won gold. He also still holds the best win/loss record with Canadian Interuniversity Sport (CIS) at 73-3 in a single season. Getting beat by the best, I think, serves to make you better.

Q: Why did you not pursue the sport further?
A: I was hit from behind by a drunk driver, which tore up my back muscles and ended my career.

Q: That’s unfortunate, but it’s good to see you’re still involved in some capacity.
A: I’ve served in the Canadian Armed Forces reserves, as an RCMP Auxiliary constable and, before that, worked as a bouncer. I’ve always found myself in different positions that involve self-defence training. I enjoy it because it blends physics, physiology, discipline and discretion.

Q: What did you do before coming to Meadow Lake?
A: I’m a certified financial planner and I may be opening a practice again in the next year or so.

Q: What brought you here?
A: My wife, June, is a teacher. After I stopped working she went back to school to get her teaching degree. She followed me all across B.C. up until my retirement, so now it’s my turn to follow her.

Q: What do you think about the Northwest?
A: I’ve found the community to be very welcoming. To fill my time, I volunteer quite a bit with the schools. I’ve gone on camping trips with the students and volunteered with different sports teams. In the last year, I’ve also put in a lot of hours with the local Legion.

Q: How’s the Legion kept you busy?
A: I’ve sat on and chaired a few committees. I was part of the Legion’s bylaw committee and its cenotaph committee. I chaired the operational audit committee, the goal of which was to identify the things we’re doing right and where we need to do better.

Q: Why is the Legion important, whether it’s here or in any community?
A: I believe the quality of life all Canadians enjoy stems from the sacrifices made by our veterans and their families throughout the entire history of our country. My family has a long history in the military and, while I can’t speak for anyone else, I served because I just don’t like bullies and I don’t like injustice. Unfortunately, sometimes diplomacy fails and the only way for evil not to thrive is for good people to do something.

Q: Speaking of the military, I see you drove up in an old army Jeep.
A: Yes, I bought it at an army surplus store. It’s been a project vehicle for about 10 years now. I use it when I go hunting and it was handy for hauling building supplies while doing renovations. It always catches a wave, but being only a two-seater and with both of my boys pretty much gearing up for university, it may soon be time for someone else to play with it. We call it the tank – not because it has a turret, rather because it needs a good sized gas tank to get you from one place to another.

Q: You also had the Jeep at last year’s Cruiser’s Car Show, right?
A: I did. I, along with Tony Calvert, helped out with sponsorship for the car show. I also drive an old Cadillac that was gifted to me and, while I’m not really a car show enthusiast, I thought it would be a great way to network and to get to know the community.

Q: How else are you involved in the community?
A: I’m still part of the Legion and, this year, I’m chairing its financial review committee. That should be interesting, but most of my focus this year will continue to be on wrestling. With high school, as well as Saskatchewan Amateur Wrestling Association (SAWA), there’s a variety of different subcategories to familiarize myself with. It requires a lot of attention and dedication considering the different rules that will allow an athlete to compete at one event, but not another. They tend to have different sets of rules and it’s important to understand what you coach one group of kids you may not be able to coach another.

Q: Weren’t you also spotted around town dressed as Santa Claus this past Christmas?
A: I don’t know who it is you’re talking about, but there is a rumour someone who resembles me visits the hospital every year, does a few Christmas parties and takes a few photos with people. He’s dressed like Santa, but I don’t know anything about it.

Q: Tell me more about your family.
A: June teaches at Carpenter High School in the mornings and Jonas Samson Junior High in the afternoons. She teaches English, social studies, as well as art. Both our boys are at CHS. My oldest, Bryan, has been accepted to both the University of Saskatchewan and the University of Regina while David is in Grade 10. I’m confident university is in his future too.

Q: What’s the best advice you’ve ever received?
A: When asked why I can be very direct with some of my statements, I used to tell people I don’t sugar-coat things because I can’t afford the calories. My wife’s advice to me, however, is not everybody is on a diet.