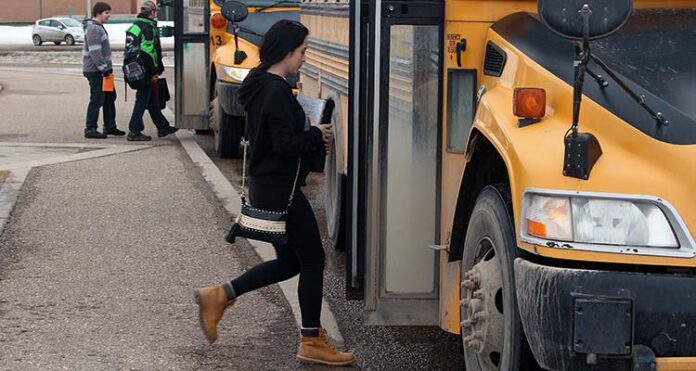 Fewer students will be riding the bus in Meadow Lake next fall.

That’s according to Northwest School Division communications officer Kaitlin Harman who is part of a committee formed to examine bus routes in the city. The committee decided, at the end of this school year, Carpenter High School students who live in Meadow Lake will no longer qualify to use the service, while no-bus zones will be set up for students at other schools. Those who live closer than one and 1.2 kilometres from Gateway Elementary School and Jonas Samson Junior High, respectively, won’t be allowed to take the bus, while those closer than 0.6 kilometres to the other schools will also be denied service.

“We had way more students registered to ride buses than we could accommodate and some of them, we felt, probably didn’t need busing,” Harman remarked. “They weren’t riding the buses but were registered to ride, so it was really inflating our numbers.”

Currently, there are 240 students in Meadow Lake who are registered to ride the bus and, of those, 40 attend Carpenter. Harman noted the number of people riding the bus on any given day is largely tied to the weather so, on warmer days, more students decide to walk. The fluctuation of riders, Harman added, not only add stress to the bus drivers, but also makes it difficult to predict how may seats are needed.

“With the mild winter we’ve had it hasn’t been as much of an issue than it could have been,” she said. “It looks like we’re going to go ahead with the changes in the fall.”

Also, it’s not expected the elimination of busing at Carpenter will have a large effect considering the majority of students have alternate ways of getting to school.

Meanwhile, supervisor of transportation Jacquie Taylor presented her annual report at a regular NWSD board meeting March 10. She noted, because of a new mapping system the division began using to track bus mileage, drivers are logging 700 fewer kilometres per day than they did before. Aside from a daily rate, bus drivers are paid 25 cents for every kilometre travelled, so implementing the system is saving the division up to $875 per week.

“What happened is, there wasn’t a clarification on how the drivers were supposed to be calculating kilometres,” Taylor commented. “With the mapping program we have, we’re able to compare what a program says route kilometres are with what the drivers submit.”

Also at the meeting, it was revealed the school division’s budget won’t be available until after the provincial election. The budget is usually released the third week in March and, according the NWSD director of education Duane Hauk, officials will have less time to plan for the upcoming school year. Hauk is also hopeful there isn’t a drop in funding from the province.