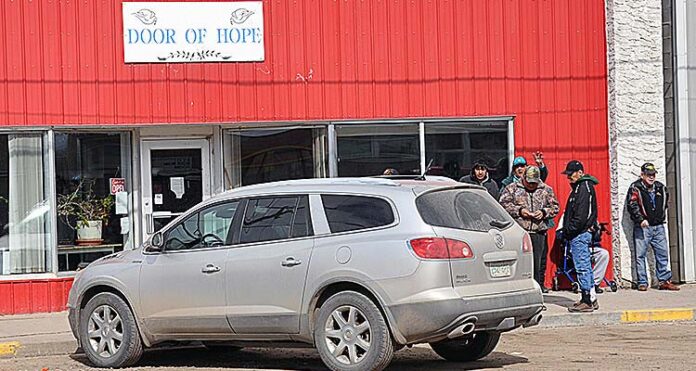 During the regular meeting of city council held March 29, a funding request by the Door of Hope was denied by the city, but local legislators did state their willingness to both volunteer at the facility, as well as advocate for the group’s financial needs.

“As a matter of policy, no charitable donations shall be made by the City of Meadow Lake to any individual or organization,” city clerk Jessica Walters noted while citing the policy. “Administration cannot recommend council take action that contravenes an established policy. However, council may choose to amend or make an exception to this policy at their discretion.”

The city currently provides an annual property tax exemption to the Door of Hope, which was worth approximately $1,100 in 2015. There are no grants or other programs currently administered by the city the Door of Hope would qualify for.

The funding request came in the form of a letter to council written by Dr. Mervin Johnson, past chair of the Door of Hope’s board of directors.

“The Door of Hope runs strictly by charitable donations and we get no subsidies or government money to help with the ongoing costs of feeding so many people,” Johnson remarked. “Since the downturn in the economy, we have seen a remarkable increase in demand for our services. At the same time, we have had a dramatic decrease in donations. Because the Door of Hope depends on donations by individuals, churches and community groups, this downturn has has had a great impact on us.”

Johnson went on to say, the organization’s community fundraising event this year did not raise as much money as usual, earning only two thirds of how much it’s raised in past years.

“This has put us in quite a serious deficit position, and we are in an overdraft position of about $30,000,” Johnson added.

Johnson also noted how much of a need there is to continue assisting the community’s vulnerable and destitute.
During Tuesday’s meeting, deputy-mayor Annette Klassen said it would be unfair to provide municipal dollars to the Door of Hope considering it’s only one of many good organizations in the community.

“They’re doing good work, but what will people do?” she remarked. “People will find a place to eat. I hope they continue. I hope I find it in myself to make personal donations as a result of reading this letter, but I can’t, as a city councillor, recommend the city provide funding.”

Councillor Conrad Read, however, believes provincial funding could be available to assist the Door of Hope, but is also afraid of what could happen if the organization is unable to maintain its current level of operation.
“My concern would be, if this did go away, and we have people in need in our community with no place to eat, when they get hungry, what’s going to happen?” he asked. “Crime statistics are probably going to go up – maybe it will be theft, break-and-enters, whatever. Like the mayor, I’ve struggled with this and wonder if there are any other avenues.”

He also suggested the city find some way of promoting the Door of Hope’s need in an effort to get others to help out.

“Maybe we could advertise somehow in order to bring this to light in the community,” he said. “I would never go against our policy, but I think there’s more we could do.”

“Sometimes, the reaction of the people – once they’re made aware of the need – they will respond in a very positive way,” he noted.

Ultimately, council voted not to provide funding, but to let the Door of Hope know of their willingness to volunteer and to advocate for the organization.

Meanwhile, an aspect of the Door of Hope that remains strong is the onsite clinic which, last week, celebrated its two-year anniversary. While a walk-in clinic continues to be offered at the Primary Health Centre in downtown Meadow Lake, the satellite clinic located in the building adjacent to the Door of Hope on 2nd Avenue East continues to prove equally as popular.

“The clinic is very well used and has proven to be quite successful,” executive director Unita Esau said.

With files from Lucas Walters