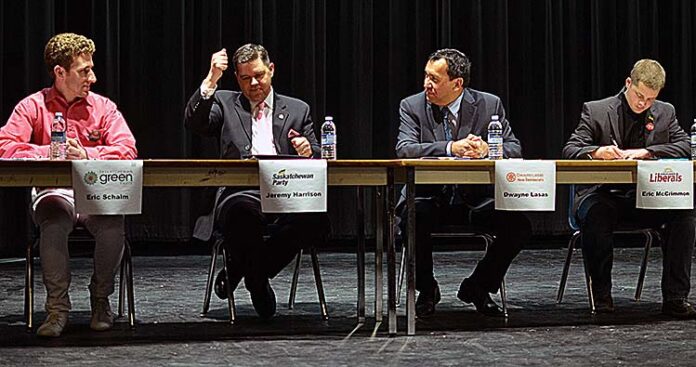 Close to 50 Meadow Lake and area residents now have a better idea of who they’ll vote for come this Monday’s (April 4) provincial election.

“I’m certain everyone here can tell a story about themselves or someone they know who has had an experience with long wait times,” Lasas remarked when commenting on his plan to address health care issues in the riding. “That is why the NDP will make this one of its first and foremost issues. Health care is one of our foundations, and that also includes mental health and care for our seniors.”

Harrison agreed with the need to reduce wait times and to ensure proper care is available to seniors, noting efforts are still underway to establish a new long-term care facility in Meadow Lake.

“Our record in terms of investing in this health region is strong,” Harrison said. “This year, the budget is about $378 million – a 61 per cent increase over the former government. One of the things we’ve really concentrated on during our years in government is addressing wait times. When we took over in 2007, Saskatchewan had the longest wait times in the entire country – it was a national embarrassment how long our wait times were. We made a very concentrated attempt to reduce those wait times and we’ve been successful. We now have the shortest wait times in Canada. Is it perfect? Absolutely not. There’s more work to do, but we’ve been willing to take some innovative approaches to that including private delivery within the public system. In terms of the long-term care facility, I can assure you we are absolutely committed to this project. This project is going to happen.”

Harrison went on to note how the government has been working with the city, RM and Prairie North Regional Health Authority to “get it right.”

“There have been a number of obstacles over the course of the last few years, but we’re committed to making sure – if we’re going to be putting $40 million of your tax dollars into a project – we’re going to get that project right,” he said.

According to McCrimmon, one of the most important factors to consider with regard to health care is prevention.

“You can treat people who already have diseases, but we need to prevent those diseases before they happen,” McCrimmon said. “The Saskatchewan Liberals don’t believe that is happening enough, but it needs to happen in order to reduce the burden on our health care system.”

McCrimmon also commented on the fallout rural communities will experience as a result of private MRIs offered in larger centres, adding it’s also important to fund health care in the North. He also praised the Lean program, noting the rooting out of waste in the health care industry might also be applicable at the management level.

Schalm, meanwhile, said the provincial government needs to be more involved with getting a new long-term care facility built sooner rather than later.

“This issue has been on the table for a really long time, and that’s absolutely deplorable,” he stated.
He also pushed for a midwife program to assist with non-complicated births in rural areas, as well as stressed the need to tackle poverty which, Schalm believes, will reduce health risks for Saskatchewan residents.

Speaking about the economic downturn’s impact on Meadow Lake businesses, Harrison said the local riding is actually in better shape than other parts of the province.

“We’ve definitely felt an impact, but probably to a lesser degree than other areas,” he said. “We have a forestry sector that’s doing relatively well, we have mills that are quite stable, and that’s the result of a lot of work between the government and industry. The agriculture sector is also doing well, particularly because of trade agreements.”

Harrison added trade agreements are important in terms of opening up markets.

McCrimmon agreed with Harrison with regard to the positive impact of free trade, but said Meadow Lake is lacking the necessary infrastructure to get the goods produced here to market.

“We lost our railroad several years ago and there has been no talk about getting it back,” McCrimmon said. “This has allowed our competitors to get their goods to market before us.”

He also noted the current softwood lumber agreement will soon reach the end of its mandate, meaning local mills will have to directly compete with other mills in Canada when it comes to shipping goods to the U.S.
Schalm, meanwhile, said something the province needs to keep in mind is economic diversification.

“Look how hard Alberta was hit by the oil crash,” he said. “But, in Saskatchewan, we have potash, we have forestry, we have our oil industry and more. It’s important not to put all your eggs in one basket, but to spread them out, especially when it comes to exports.”

Lasas, however, recognizes many businesses in the riding, particularly smaller ones, are having trouble financially.

“Everything has kind of slowed down,” he said. “But, with the economy, you also have to be able to balance it with the environment. We need to protect what we have. I agree with economic diversification, but we also need diversity when it comes to ideas. We need to come together and my party supports consultation. Consultation is the key to success.”

As for his vision for post-secondary education in Meadow Lake, McCrimmon reminded those in attendance he is currently enrolled in university.

“I’m in Saskatoon because of the course I wanted to take, but North West College here in Meadow Lake has several programs,” he said. “You can earn your entire teaching degree here, you can learn a variety of trades and I’d like to see that expanded so someone like me can stay in the community and get his or her degree.”

Schalm said it would be ideal if Saskatchewan could follow the same model as the European Union, where many countries provide post-secondary education at no financial cost to students.

“If they can do that, why can’t we?” he wondered. “We are going to put pressure on all post-secondary institutions to make tuition 100 per cent publicly funded.”

Lasas, who has four children in the school system, said he’d like them all to receive a post-secondary education, but does not agree with free tuition.

“I’ve been to Europe, and I know they pay a 52 per cent tax for that to happen,” he said. “That’s a model I think all parties would shy away from. It’s a very nice idea, but too costly for our taxpayers.”

“There’s no such thing as a free lunch,” he said. “One thing I’ve learned in public life is, whenever you hear a politician say something is free, it means you, as a taxpayer, are paying higher taxes.”

Harrison went on to note the many investments the Sask Party has made in North West College over the years, citing the increased number of programs and additional resources.

“The reason we’re investing in job training and adult basic education is because we’ve been creating jobs. We’ve seen in increase in 68,000 jobs over the course of the last several years – an average of about one every hour.”

As the meeting progressed, members of the public had an opportunity to address the candidates with questions of their own. Topics included equalization payments, First Nations issues, the preservation of natural resources such as fresh water, as well as job security for teachers following next week’s vote.

In closing, Harrison expressed his gratitude not only to the voters in attendance, but also to his fellow candidates for taking the time to exchange their views.

“It’s a challenging thing to put your name on a ballot,” he said. “And, I know we have a couple of young candidates who I really applaud for doing so. I started out at a young age in public life as well – it’s a very rewarding thing and it is an honourable calling.”