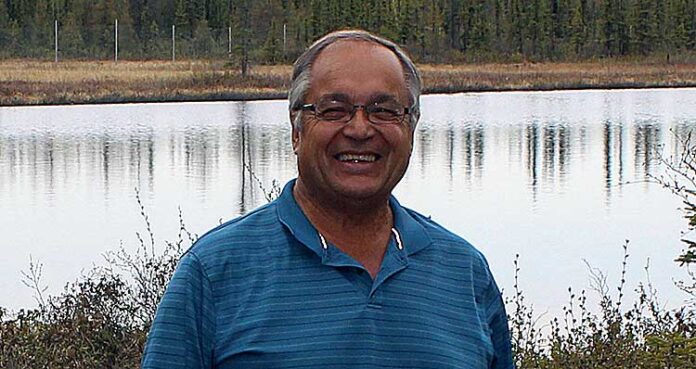 Born and raised in Meadow Lake, Joe Handley went on to do big things. After teaching in Africa and spending a decade in Manitoba, he moved to the Northwest Territories and was elected that territory’s 10th premier. Recently, Joe spoke with Northern Pride about his upcoming keynote speech at North West College, his career as an educator and why he entered politics.

Q: What brings you back to Meadow Lake?
A: I’ve been invited by the North West College to do the keynote address at their graduation ceremony Friday. I’ve never been to Meadow Lake to do a speech before, but I’ve been here for other reasons. I’m honoured to be asked to come back to my hometown. The main theme of the speech is about self-confidence and determination. Those will take you a long way in life. That’s the core message, but I have other pieces of advice as well. My plan is to basically outline some of the things that have made differences in my life. I’m 72 years old and I retired a few years ago. I want to reflect back on my own career and the highlights that caused me to change paths or to stay on the course I was on.

Q: What’s your connection to the community?
A: I was born and raised, and completed high school in Meadow Lake. My parents were Bill and Ann Handley. My mother was a Delaronde and was related to the Morins and other families. I have relatives in Meadow Lake. My mother passed away in November 2013 and my father died in 1999. I don’t have any siblings in Meadow Lake, but I have two sisters living in Saskatchewan with one in Prince Albert and another in Assiniboia. The rest of us are spread out over western Canada.

Q: What do you recall about Meadow Lake?
A:  I left to go to a teacher’s college in Saskatoon in 1962, but growing up Meadow Lake was a small town and, like all young people, I wanted to go out and see the rest of the world. I was anxious to leave Meadow Lake. Certainly, my parents encouraged my siblings and I to go out and experience the world. I liked Meadow Lake. It had a great high school and I had a lot of fun growing up. When I was away longer, I really began to appreciate the people from Meadow Lake and the beauty of the place. It’s a beautiful part of the world and something you take for granted when you live there.

Q: Did you become a teacher?
A: I did one year of teachers’ training then I taught in Cumberland House for a year. Then, I taught in La Loche for two years and I also taught in Beauval. After that, I went to Africa. It was such a different experience because it was such a different culture. Also, it was a good learning experience about people. While our culture and challenges may be different, when you get down to the root of it all, people are people. No matter where they come from in the world, they love their children and want the best for them.

Q: Were there many Canadians teaching in Africa at that time?
A: At the college I was at, I think there were eight or 10 Canadians out of a staff of about 50. There were a few from Britain, but mostly people from Ghana, which was the country I was in. When I was there, there was a coup and the government was overthrown, but it didn’t affect us so much. There were also things going on in Canada from 1970-72 politically. I was interested and followed it as closely as I could. But, more than anything else, that experience of living in another culture – particularly one with a tremendous amount of poverty – I learned Canada is a great place and, what we consider to be barriers and insurmountable challenges, are really not that bad compared to what some others need to struggle with. It’s really life and death. It made me appreciate Canada more than anything else.

Q: When did you come back?
A: In 1972. I had a job teaching at the University of Manitoba in a native education program, training teachers to work in aboriginal and northern communities. I stayed there for two years, then I went back to university in Ottawa to complete a Doctor of Philosophy (PhD) program. I was there for 18 months, then I taught at the University of British Columbia for a year. Then, I moved back to Manitoba as the official trustee and chief superintendent for Frontier School Division. It’s a huge division covering most of northern Manitoba. I was only 32 and I was wondering to myself ‘how did this happen?’ I worked there for nine years before I was offered a job as deputy-minister of education for the Northwest Territories.

Q: When did you become an MLA?
A: I was elected in December 1999 and I was immediately appointed the minister of finance and various other positions. I spent four years as a minister for the territorial government, then I was encouraged to let my name stand for premier, which I did and I was acclaimed. Nobody ran against me for my seat as an MLA or the position of premier. I served until 2007 when I retired.

Q: It seems like you were invited to Yellowknife to lead.
A: I was very honoured and I think they chose me because they knew about the work I had been doing in Manitoba. I didn’t apply – through word of mouth they phoned me and asked me to take on the job. I was very fortunate in life. I didn’t apply to be a superintendent in Manitoba – I was asked. I was honoured with those requests and felt I must be doing something right.

Q: What was it like serving as premier?
A: It was a very challenging job because of the issues we were dealing with. When I was premier, on the economic front, we had a lot of diamond mine exploration going on. So, there were challenges of making sure we got the best return possible from those diamond mines. They’re a non-renewable resources and the chance only comes once. There were also environmental issues we were concerned with. The biggest challenges generally were – and still are – aboriginal rights and land negotiations. People appreciate what I did and I retired feeling I made the world a little bit of a better place.

Q: Do you still live in Yellowknife?
A: I do. It’s home for me now. Winter lasts a little longer here and we probably get two or three weeks less of summer weather than Meadow Lake. At the same time, on the positive side, we get longer days because of daylight hours. We’re north of the 63rd parallel and not too far from the Arctic Circle. My wife, Theresa, and I have two children and they live in Yellowknife too. We also have four grandchildren, so that makes it a place we want to live.

Q: Having been to so many places, what have you learned?
A: It’s been a continuation of time I spent in Africa where it doesn’t matter where you live, where people come from, what they’re doing in life, we all have the same needs and interests. It’s also given me a good perspective and a balanced view on environmental issues and balancing it with economic challenges. It’s about maintaining a healthy environment while, at the same time, managing to have an economic base. That’s where the dollars come from and we all need money. It’s resulted in me having a more balanced view of the world and a better perspective on politics as well.