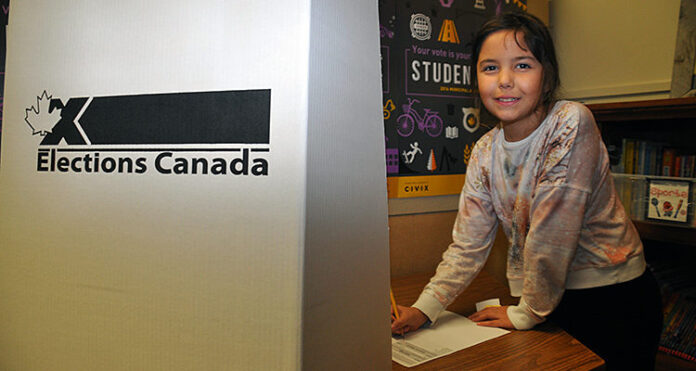 Who said politics has to be boring? Certainly not Grade 3 students at Jubilee Elementary School in Meadow Lake who recently took part in a mock vote to determine who they feel is best suited to serve the municipality as an elected official.

“According to the Grade 3 curriculum, students should have the opportunity to compare how decisions are made in the local community and in other communities we will study,” noted Jubilee vice-principal Nancy Madsen. ”This includes ideas such as identifying formal and informal types of leadership, constructing an inventory of examples of positive leadership, investigating the decision making process in a community and identifying examples of decision making structures where leadership is elected.”

The mock election was conducted as part of the Student Vote program – an initiative facilitated by CIVIX, a national civic education charity dedicated to building the skills and habits of active and engaged citizenship among young Canadians – and took place the same day as the actual Oct. 26 municipal election to determine the latest incarnation of Meadow Lake city council.

In addition to “voting” for council, students also had an opportunity to select school division representatives.
“What is really valuable here is students recognizing and being aware of positive character traits and hopefully building on those traits within themselves,” Madsen added.

The results of the student vote saw Tom Harrison and Conrad Read each receive 22 votes, while Kim Chiverton received 21, and Merlin Seymour and Glen Winkler earned 18 each. Richard Levesque received 17, while Curtis Paylor received 16. This means, Paylor would have been the odd man out if this had been the actual election result.

As for the Northwest School Division board of directors, Barb Seymour and Glen Winkler received 17 and 11 votes respectively, while the unsuccessful candidates would have been Doug Murray and Dustin Treptow who each received eight votes.

According to CIVIX communications manager Dan Allan, voter turnout is typically lower among youth, and particularly much lower during municipal and school board elections. It’s his hope programs like Student Vote will eventually change this.

“By learning about municipal government and the electoral process, exploring the local issues and candidates and holding a vote on their local candidates, Student Vote participants will become more engaged democratically, and hopefully more likely to cast an actual ballot when they turn 18.”