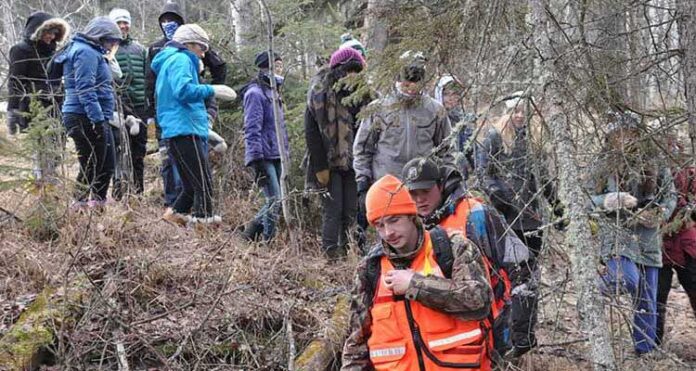 Is there a doctor in the house?

Actually, there were quite a few – or, at least quite a few future doctors – when close to 50 medical students from the University of Saskatchewan toured Meadow Lake on the weekend before making a stop at Waters Edge Eco Lodge in the Meadow Lake Provincial Park for wilderness medical training.
The visit was part of the Saskatchewan Medical Association’s (SMA) Roadmap Program and also served as a backdoor recruiting method by introducing the students to both health care needs and opportunities in the North.

“There are some recruitment aspects, but more so it’s about exposure to rural practice,” explained Dr. Stephen Loden, a local physician who accompanied the students during their stay in the community. “I don’t see this as a recruitment drive for Meadow Lake specifically. I see it as exposing students to the idea of living and practising in a rural area. It’s great they see some of the beautiful places in Saskatchewan because I believe we’re always encouraging people to stay in the province, but, again, I see it as more of a rural initiative.”

The students arrived from Saskatoon by bus around 10 a.m. at which time they were greeted by mayor Gary Vidal at the clinic on Centre Street. After touring the facility, they took in some of the sights offered by the city before making a stop at the hospital to gain an even greater perspective of what life in the health care industry is like in a rural, small town setting.

“Now, we’re up here in the park and we’ve met up with our colleagues from the hospital – a few paramedics and some of the volunteer firefighters are here,” Loden remarked when interviewed Saturday afternoon. “They’ve prepped up the afternoon for us. They’ve been out in the bush, setting up and they’re going to lead a search and rescue operation in a few different stages.”

The students worked in groups as part of a mock search and rescue exercise to locate an “injured hunter” and a “lost child.” They also learned basic survival skills like how to light a campfire and build an emergency shelter in the woods.

Among those on hand for the outing was third-year U of S medical student Dwip Parekh of Saskatoon.

“SMA usually comes out and takes us on these trips a few times a year to show us what the needs are in rural Saskatchewan, and I think one of the biggest reasons is – as medical students – we need to see what our own province needs and what kind of medical needs are out there,” Parekh said. “This helps us shape where our interests are and guides us in deciding where we want to go with our medical careers.”

Parekh worked in Meadow Lake as a prep student this past summer and said he is very interested in pursuing a career in rural medicine after graduation.

Also part of the group on Saturday was first-year student Brooke Hoffman of Regina.

“This is my first Roadmap and it’s been pretty good so far,” Hoffman said. “I don’t have a lot of experience with small towns, so getting this exposure and seeing what rural medicine is like is really important for us as students. I thought it would be a lot more strictly family practice, but today I saw there are a lot of physicians who do family as well as emergency. They also do surgery, anesthesia – they’re a lot more well-rounded than I would have expected.”

Meanwhile, Loden said there is still a need for more doctors in Meadow Lake and other parts of Saskatchewan’s North.

“There is always turnover,” he said. “If we have a 10-physician practice, there’s usually a turnover of one or two physicians per year. In the last few years we’ve seen a lot of people who have trained in Meadow Lake are coming back to Meadow Lake. I’m an example of that.”