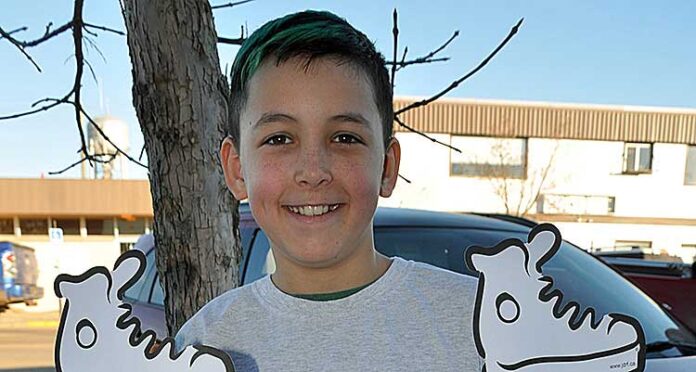 Ten-year-old Kazzer LaBrash has a story to tell, and now he has the opportunity to do just that.

The Meadow Lake area youth, who was diagnosed with type 1 diabetes close to two years ago, was recently selected to serve as the junior ambassador for the 2016 TELUS Walk to Cure Diabetes, an event scheduled for Cold Lake, AB Nov. 19.

“The walk is organized by the Juvenile Diabetes Research Foundation (JDRF), which is a major charitable organization that raises money to put toward diabetes research and awareness,” explained Kazzer’s mother, Karissa LaBrash. “Being as this is still somewhat new to us, we figured we’d take part and do our part to show our support.”

About a month ago, however, the LaBrash family received a call from a JDRF official inviting Kazzer to serve as the youth ambassador. Karissa LaBrash said newly diagnosed individuals are often selected to stand up and share their stories.

“I ran it by Kazzer and he was totally up for it,” she said. “During the walk, he’s agreed to give a speech about his diagnosis, how it’s impacted his everyday life and what his goals are for the future. He also gets to cut the ribbon to kick off the event – basically, he’ll be the kid of the show.

Kazzer is currently enrolled in Grade 5, and his school, Gateway Elementary, has also been raising funds to assist JDRF. In addition to a special lunch held yesterday (Nov. 9), paper shoes – similar to Telemiracle hands – will be sold Nov. 15-17 to garner additional funds and to raise awareness about JDRF and its efforts to combat diabetes.

“We have two boys and both were born in the month of February,” Karissa LaBrash continued. “Each year, around the time of their birthdays, we have faithfully brought them to the doctor for a routine checkup. I had no concerns when we went for Kazzer’s checkup in February of 2015, other than the fact he seemed to drink a lot and use the bathroom quite a bit.”

It was eventually determined Kazzer’s blood sugar levels were out of whack and he was admitted to the hospital for a week until things could be brought under control. The LaBrash family was living in Grande Prairie at the time, but soon relocated to Meadow Lake, which is Kazzer’s father’s (Albert LaBrash) home community.

“It was a very stressful time for us – this is a lifetime commitment, it’s not something that’s going to go away in three months,” Karissa LaBrash remarked. “It will never go away, but – in our eyes – he’s the biggest trooper. Before, if he saw a needle, he’d pass out. Now, he needs four insulin injections per day and anywhere from seven to 15 tests per day depending on where his levels are or his activity level.”

Kazzer LaBrash, meanwhile, said he can no longer eat what he wants anymore.

“I also have to test my blood sugar levels and give myself injections every day,” he reiterated.

“We still get comments from people who say he’s had too much sugar,” she said. “That’s not the case, but we do have to watch his carbohydrate count, and we need to weigh everything that goes into his mouth. He’s still active. He plays soccer in the spring, but he sometimes needs to take a few more breaks than the other kids. Every day is a challenge – we never know where his number will be and we never get the same results twice.”

Kazzer LaBrash went on to note he’s looking forward to the walk and addressing the large crowd expected to be on hand.

“It will be fun to talk in front of everybody and to share my story,” he said.

Karissa LaBrash agreed, saying Kazzer’s involvement in the event is a big deal for the entire family.

“It’s great to see him take part because it shows he’s managing his diabetes, it’s not managing him,” she said. “It’s his story and there is nobody better to tell it than him.”