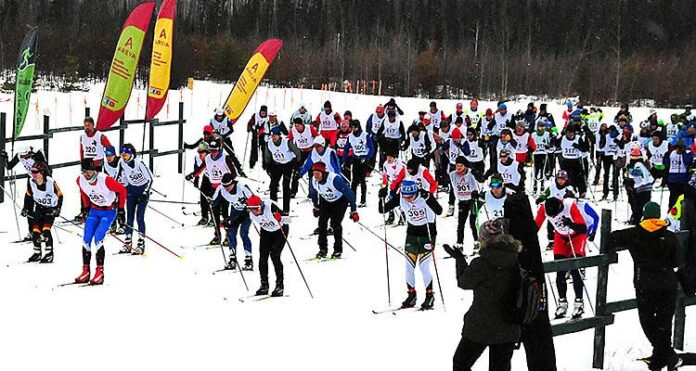 With the 34th annual Don Allen Saskaloppet in the books, operations with the La Ronge Ski Club are winding down.

The two-day races held north of La Ronge March 3 and 4 attracted more than 200 skiers from throughout the province, as it’s the last major cross-country skiing event in Saskatchewan this season. It included many races of various lengths with the longest two spanning 45 or 75 kilometres with an overnight stay.

“The overnight skiers started Friday at noon hour and slept overnight at the summit on the trail, then finished skiing on Saturday,” stated Saskloppet chairperson Dorothy Looyestein. “The rest of the skiers set out on Saturday.”

The event is named after the late Don Allen who was instrumental in getting the trails started and who also had the first active ski team in La Ronge. According to Looyestein, the races are well-known to skiers with many coming every year. Cash prizes are also awarded to both the two fastest men and women who complete the course and La Ronge’s Hailey Robinson clocked the best time on the women’s side.

Looyestein – who has been chairperson for the past six races – also announced she won’t be returning in the role next season. She wants to spend more time visiting ski trails in the province with her family.

“I’ll probably feel a little bit left out, but I’ll be doing some skiing,” noted Looyestein.

Meanwhile, three members of the ski club are heading to the 2017 Cross Country Ski Nationals in Canmore, AB. Those races are scheduled for March 18-25 and those representing La Ronge include Jamie Woodhouse-Mckenzie, Taylor Harrington and Michio Green. Ski club coach Hilary Johnstone said those three athletes also attended races at Lake Louise earlier this season, so they’re ready for what nationals have in store.

While the Saskloppet is traditionally the most attended event the ski club hosts, Johnstone added close to 220 skiers attended the School Ski Championship in February. It’s an open race and she noted all school in northern Saskatchewan are invited to attend.

“It’s a really fun race for kids and they have a lot of fun,” Johnstone explained. “A lot of them have never raced before or skied much, but the schools get them out on skis and let them go.”

Johnston went on to say this year, for the first time, a group from Saskatoon attended the championships, which include cash prizes in a number of sprint-style races.