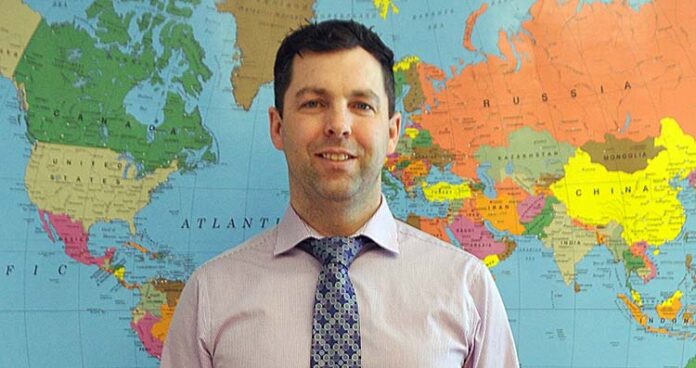 Although not originally from the community, CHS vice-principal Trevor Gerwing considers Meadow Lake home. Recently, Trevor spoke with Northern Pride about his interest in history, his career as an educator and his love for coaching sports.

Q: What does an event like the recent Swing into Spring fundraiser mean for Carpenter High?
A: It’s vital to us in terms of running the programs we offer here. We run basketball teams, volleyball teams, a big drama program, a huge band program among other things and all that costs money. If we’re not going to have huge user fees, the only way we can get around it is to hold fundraisers and for the community to show the support it always does. Their support is always very much appreciated.

Q: How many years has it been for this event?
A: I’m not sure. We didn’t do it last year – we took one year off and came back with it this year. I believe it’s 13 or 14 years now. I haven’t been the emcee the whole time. I’ve done it maybe the last six or seven times, but before that it was Tim Johnstone.

Q: How did you get to be emcee?
A: Well, there wasn’t much of an audition process. The head organizer is Judy Waites. She told me I was doing it and I said, yes ma’am.

Q: Each year you also co-emcee alongside one of the students. How much preparation goes into serving as host?
A: We just go up and have fun, but I do have a script. I usually type the script out then talk to the coaches and such to see which student might do a good job, might enjoy it and might get something out of a public speaking experience. When someone is selected, we go through it (script) a couple days before and talk a little more about what we’re going to do. I also like it when the student has something to say from them at the end, and I thought, this year, Payton Morgenstern did a really great job. She was excellent.

Q: Has fundraising always been necessary in terms of extracurricular activities?
A: I think it’s the same case with all schools. There isn’t enough money just given to a school in a decentralized budget to do a lot of the things we need to do. It is up to the individual schools to produce school-generated funds. Given where we are geographically and the size of the school we have, to compete in a lot of sports it involves a lot of travelling and a lot of weekends. But, our staff give a lot of hours because we believe it’s very important in terms of engaging students.

Q: What is your actual role here at CHS?
A: I’m one of the the vice-principals here. I taught here for three or four years at the beginning of my career. I taught native studies, history and English. Then, I moved to Jonas Samson Junior High as vice-principal. I worked there for two years before the opportunity arose to come back to CHS. I’ve been back here as vice-principal for seven or eight years now. Time flies.

Q: Do you still teach on top of your VP duties?
A: Yeah, my favourite class I teach is History 20. It’s about the history of the 20th Century and has a lot to do with the World Wars, the Cold War, Vietnam – I have a real passion for that stuff and I really enjoy it when I get a class full of kids and it’s my challenge to hook them.

Q: Are there any historical figures you look up to?
A: There are lots of them. Being kind of a student of the Second World War, Winston Churchill has to be regarded as one of the greatest leaders of all time. And, while it may not be a popular thing to say in western Canada, I’m also a pretty big Pierre Trudeau fan. I understand that’s not the view of a lot of people here, but characteristics you look for in leaders are competence, courage and fearlessness – people who are willing to do what they think is right and the heck with the consequences.

Q: With everything happening in today’s world – especially south of the border in terms of U.S. President Donald J. Trump – do you feel we’re experiencing history in the making?
A: I think it’s unprecedented. People are going to look back on this as a phenomenon. The idea of populism or whatever it is can be hard to define. People are throwing around a lot of terms or words they don’t even necessarily understand, but you can see a lot of parallels with things that have happened previously in the 20th Century. We’re lucky we live in the information age, we’re lucky we have the media to hold people to account and to expose the truth. We also have a freedom loving western world, so I think this will be a blip on the radar in the end, but it is also something that will be in history text books and that we’ll be talking to our grandchildren about.

Q: What led you to pursue a career in education?
A: It definitely wasn’t a straight line. I worked for a little while out of high school, but my parents were both involved in the sector. My mom was a teacher and my dad was a chief financial officer. I guess I kind of fell into it in the beginning. I always enjoyed kids and I enjoyed history, so I guess if you meld those two interests it was kind of the natural choice. There were some other things I was considering, but I have no regrets.

Q: You’re not originally from Meadow Lake, correct?
A: No. I was born in Uranium City, grew up and graduated high school in Turtleford. My wife went to high school in Debden and we have three kids. We both have jobs here, a good life, the kids have tons of friends – it’s a great community and we really enjoy it.

Q: Tell me about your family.
A: My wife’s name is Megan and we have three sons. Dawson is 10, Miller is six and Parker is four. The older two are involved in a lot of hockey. Parker will start next year, so that keeps me busy in the wintertime.

Q: You coach minor hockey?
A: Yes, I coach both my sons. I coached Atom and Novice this year, as well as our Atom carded team which is kind of a Tier 1 team we made in order to go to some tournaments at the end of the year. I‘m on the ice with them four or five nights a week throughout the season. It’s a ton of fun and one of the best things is getting to coach with some really awesome guys.

Q: What other sports have you been involved in over the years?
A: I played all the school sports as a kid, but I was really involved in baseball. When I came to Meadow Lake, Glen Winkler was kind of the baseball godfather and he got me involved again playing with the White Sox. I thought my playing days were over, but I played another seven or eight years. We even won provincials one year. My brother, Kevin, actually runs the team now.

Q: Would you say sports are important for young people?
A: Yes, it builds character and it provides shape and experiences for them. Aside from the healthy lifestyle stuff, the most valuable thing about sports is learning to be part of a team – something bigger than yourself – and respecting your opponent.

Q: What’s the best advice you’ve ever received?
A: My dad always said, if a job is worth doing, it’s worth doing right. If you do get involved in something, do it to the best of your ability and how you think it ought to be done.