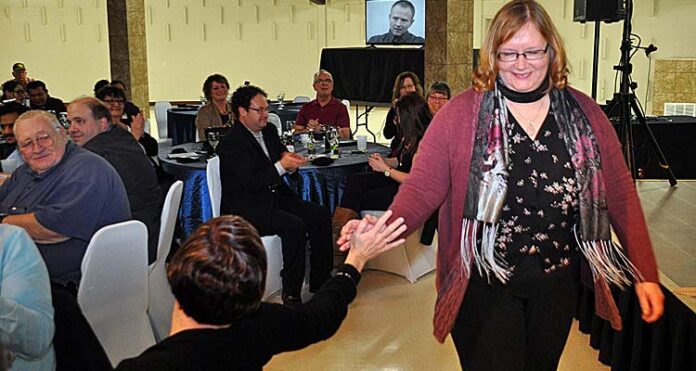 Unlike the recent Oscars ceremony, there was no controversy or confusion when announcing the winners of last night’s Meadow Lake and District Chamber of Commerce Business Excellence Awards.

The 12th annual MLBEX Awards ceremony was held March 15 at the Meadow Lake Civic Centre and saw Meadow Lake Welding and Machine Ltd. walk away as this year’s Business of the Year recipient.

“Kent East purchased Meadow Lake Welding and Machine Ltd. a few years ago,” noted Chamber administrator Adriane Ouellette when summarizing information provided as part of Meadow Lake Welding’s nomination package. “This shop is never too busy to help anyone who has a welding need.”

The nomination went on to read East never hesitates to help out customers in need of his services, while he’s also been a long-time supporter of local programs and organization in terms of providing both time and money. Among those which have benefited from his help are Meadow Lake Minor Hockey, Meadow Lake Minor Baseball and more.

Meanwhile, Cheryl Dodds was announced as the 2017 Volunteer of the Year, and Kirt and Terri Prete were the recipients of the Community Builders Award.

“Volunteerism is a force that encourages collective responsibility while acting as the social glue that brings and holds together a community,” reads information included with Dodds’ nomination. “Cheryl Dodds does all of this and meets and exceeds the MLBEX eligibility for the Volunteer of the Year Award.”

“She is always behind the scenes doing extra, which is appreciated and valued but never recognized,” noted Meadow Lake fire chief Neil Marsh. “Cheryl is always the first to put up her hand.”

As for the Pretes, they have provided many financial donations in support of programs and projects throughout the community including PineRidge Ford Place, the PineRidge Ford Curling Club, PineRidge Ford Theatre at Lions Park, Citizens on Patrol, Drive 4UR School, and more. Kirt Prete also served as Chamber president, and is credited with creating MLBEX during that time. Terri Prete is a board member with the Northwest School Division, is a member of the local music festival committee and more.

“When it comes to the Community Builders Award, you can’t talk about Kirt without Terri and vice versa – they are a package deal,” states information included with their nomination.

Other award winners at last night’s gala event were Neufeld Contracting in the Small Business category, the Mill Town Sports Bar’s Antonio Vigor Briones who received the Customer Service Award and Tawaw Cabins, which was named the 2017 Aboriginal Business of the Year.