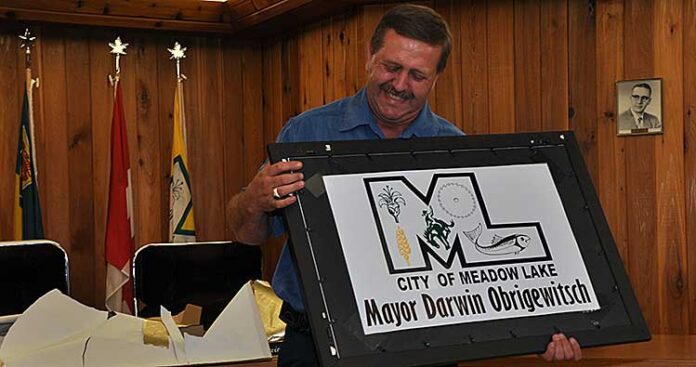 Former mayor Darwin Obrigewitsch, who resigned from the role in 2011 before moving to Vernon, B.C., died March 14 following a brief illness. He was 53.

“We are very saddened of the passing of former mayor Darwin Obrigewitsch,” Vidal remarked on behalf of the city. “Darwin was a valued member of our community for many years. He served our community in many ways as a business person, as a member of many volunteer organizations, as well as his role as both councillor and mayor for several years.”

Mr. Obrigewitsch grew up on a farm southeast of Regina before moving to Kenosee Lake when his father retired. He graduated from high school in Kenosee Lake after which he spent three years doing seasonal work with the department of parks. From there, he took a pre-employment course through SIAST electrical construction.

Following a few years spent in the electrical trade, Mr. Obrigewitsch moved into the retail sector where he managed a quick oil change business in Saskatoon before transferring to a Turbo gas station, also in Saskatoon. His time with Turbo eventually led him to an employment opportunity in Kindersley and he later worked for a dealership in Davidson, SK before deciding to make Meadow Lake his home in 1992.

During his early days in the community Mr. Obrigewitsch owned and operated a Turbo gas station at the Meadow Lake Mall before purchasing Eastside Grocery, a business he sold years later before accepting a position at Northland Chrysler.

He was first elected to Meadow Lake council in 1997 and served two-and-a-half terms as a councillor before being elected mayor in the early 2000s and serving an additional three terms in that capacity.

On top of his careers as a businessman and a politician, Mr. Obrigewitsch was involved in many non-profit organizations both here and in other communities. He was a Kinsmen member in Kindersley, Davidson and Meadow Lake and once served as the local club’s president. He was also a member of the Kindersley Lions Club, volunteered for hospital-based Meals-on-Wheels programs, was a member of the joint technical advisory committee with Flying Dust First Nation, served as vice-chair of the Northwest Regional Waste Management Authority and served three terms on the board of directors for the Meadow Lake Credit Union in addition to fulfilling  numerous other commitments.

Mr. Obrigewitsch and his wife, Kathy, were married for 28 years. He is survived by her, as well as his children, Alex and Kelsey.

“We offer our sincere condolences to his family and the many friends he still has in our city,” Vidal concluded.