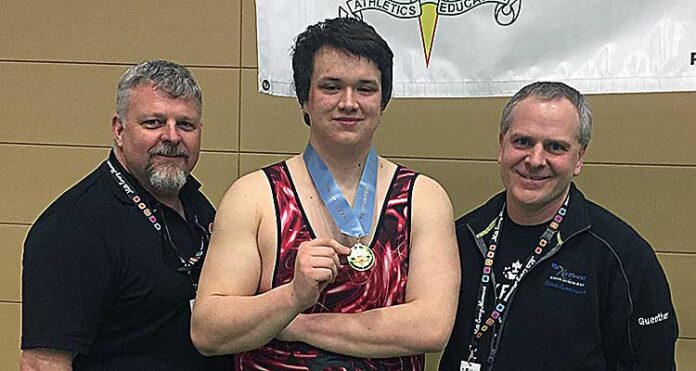 History has been made at Carpenter High School.

“It feels great to win gold, from a personal standpoint as well as for my team and for my school,” remarked Ambroziak, who competed in the male 130-kilogram weight class. “I really want to thank my coaches, fellow wrestlers, friends, family – especially my mom who has encouraged me from day one – and everyone else who continues to support me throughout my wrestling career.”

“Caitlin broke the threshold back in 2014 in terms of CHS winning a medal at provincials, but until this weekend, we’ve never had a provincial wrestling champion,” reiterated CHS wrestling coach Jason Guenther. “We’re all very proud of Jacob and the rest of the crew. With winning the 3A regional team trials for both boys and girls last weekend (March 10 and 11 in Moose Jaw) and now earning our first provincial gold, it’s been a great year for wrestling at Carpenter High.”

“Everyone who was a part of Spartans wrestling this year shares in that victory and will forever be a part of CHS’ first regional wrestling championship team,” he said. “As for Jacob, many sports legends begin with a quiet and shy character. The gentle giant in this story is Jacob. Uncomfortable with the spotlight, Jacob’s humble nature hides the passionate competitor he is… to win the provincial high school championship with barely a dozen tournaments worth of experience speaks to this athlete’s special accomplishment.”

Guenther, meanwhile, has been coaching wrestling at CHS for 10 years, while the program itself has been in place for closer to 15 years.

“That’s a long time to go without having one champion,” he added. “And, this (SHSAA provincials) is one of the toughest wrestling events. The Saskatchewan Amateur Wrestling Association provincials is a strong event too, but it usually features fewer wrestlers making high school provincials the premier event.”

Guenther also believes CHS’ recent success at the provincial level could help the high school wrestling program grow in the years to come.