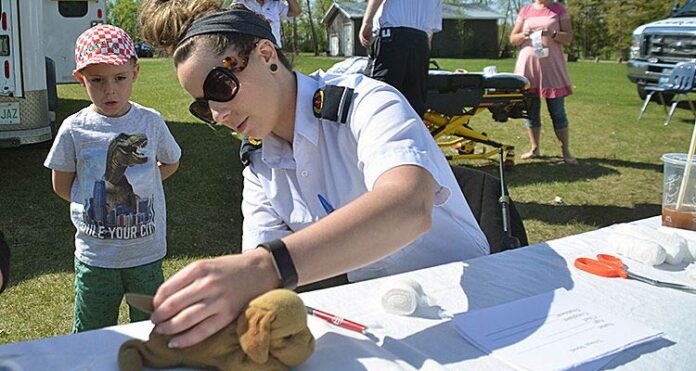 There were several bear sightings – and other “animals” of all shapes and sizes for that matter – in Meadow Lake May 22.

That was the day when local emergency services hosted their second annual Teddy Bear Picnic in Lions Park. The main attraction featured a clinic where youngsters could bring their favourite teddy bear or other stuffed animal in need of repair and have Meadow Lake nurses and EMS workers stitch them up before administering them with a clean bill of health. Other attractions, meanwhile, included a barbecue, firefighter and RCMP demonstrations as well as information booths from a variety of area services such as Mothers Against Drunk Driving (MADD) and Positively Parenting.

“We’re hoping to do it every year just to get the public out so they can learn more about the various emergency services, as well as whatever other groups we can get to come out,” explained paramedic Chris Gill, one of the event’s organizers who also volunteers as a local search and rescue worker. “More than anything, it’s a fun day in the park where people can enjoy a burger and get the kids to bring their teddy bears, have them doctored up and have a good time.”

“We want families to come out and interact with fire, search and rescue, EMS and a few other community agencies,” Karambetsos said. “We’re basically trying to build a rapport with everyone so, if they see us in an emergency situation, they know who we are – they can put a face to the name so to speak.”

While the inaugural event was EMS-led, Gill said the search and rescue volunteers spearheaded organizational efforts this year, adding the event itself, however, is about all emergency services.

“It’s important for the community, especially for the young kids who come out to see the various emergency services, learn about what we do and interact with the public so they know we’re out there and available if needed,” he noted.

The name “teddy bear” comes from former U.S. President Theodore Roosevelt, who was commonly known as Teddy. The name originated from an incident on a bear hunting trip in Mississippi in November 1902. The term Teddy Bears’ Picnic originated from an instrumental composed by John Walter Bratton in 1907 (it would receive lyrics thanks to Jimmy Kennedy in 1932), while various teddy bear picnics similar to the one celebrated in Meadow Lake have taken place in communities across North America for decades.

“I’m kind of vague regarding the history of the teddy bear picnic overall, but we developed our idea through the Winnipeg EMS service,” Karambetsos said. “Chris and I are both from Winnipeg and they have held an event like this for many years. It’s more of a community get-together than anything.”

“Hopefully our event gets bigger and better every year,” he said.