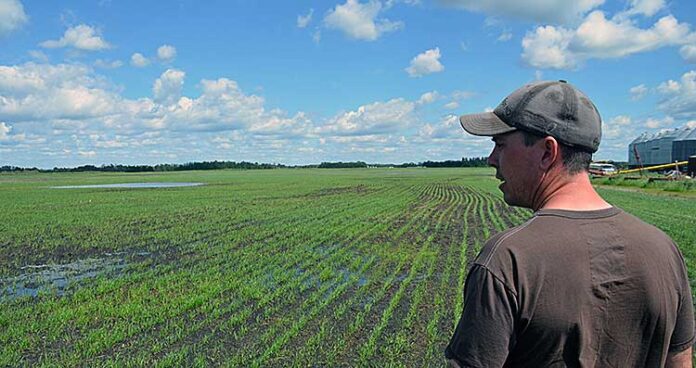 Just because it’s an historic moment doesn’t mean it has to be a pleasant one.

That’s what farmers from Meadow Lake and other parts of the Northwest have come to recognize in the wake of persistent rainfall in recent weeks that’s put a damper on their operations and which is expected to take its toll on their bottom lines come this year’s harvest season.

“It doesn’t look too good,” remarked Ryan Wilfing, a grain farmer who operates east of Meadow Lake. “We’re about three weeks into the season and we’re already at the point where we hope to still break even and to minimize our losses wherever we can. A lot of damage has already been done.”

Normally, Wilfing seeds about 4,200 acres. This year, however, close to 1,000 of that overall amount could not even be seeded because the ground was too wet. Meanwhile, the continued rainfall could still result in what has been planted failing to properly develop.

“It’s already been bad, and we’re expected to get at least another two inches of rain on the weekend and into early next week,” Wilfing said when contacted late last week. “We’ve always had wet years, but never to the point where we couldn’t even put a crop in. In my time, and I believe also when my dad (Ray) was running the operation, there was never a year where any of our fields went unused. This is not a common occurrence.”

However, Wilfing is willing to accept the current circumstances, noting this is all part of being a farmer.

“There’s not a whole lot we can do except hope for a better year next year,” he said. “This is the sort of game we play. You just hope to do your best in the good years so you’re able to take the bad years as they come. Either way, this will be a year to remember. We’re already looking at 200 per cent of the average amount of precipitation we normally have by this time of year.”

According to Environment Canada, from June 13 to 15 alone, the Meadow Lake area received 28 millimeters of rainfall. Rain continued in the days to follow, however, making even more of a mess in the fields and hindering farming operations even further.

“Rainfall so far this June in Meadow Lake is 107 millimeters,” noted John Paul Cragg, a warning preparedness meteorologist with Environment Canada when contacted earlier this week. “ The average rainfall for June is 66.5 millimeters, so Meadow Lake is already well over the monthly average and there is more rainfall forecast for midweek.”

As for what producers can do to combat potential losses, Wilfing said crop insurance plays a big role.

“It all depends on how different people have their crops insured,” he said. “They will be compensated to a certain extent, but everyone is in a different situation.”

He also said it’s amazing how quickly things can change from year-to-year and from place to place.

“In Saskatoon and other parts of the south, they’re crying for rain,” he said. “I guess this year it’s our turn to experience a bit of a crop failure. It’s just one of those things, as farmers, we have to deal with.”