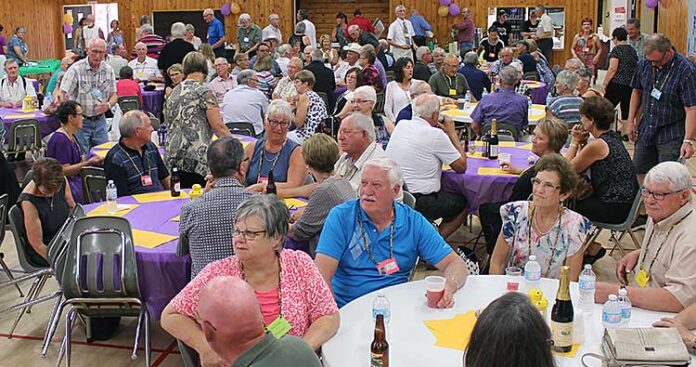 The passing of 50 years was evident to all those who attended a Carpenter High School (CHS) reunion in Dorintosh on the weekend.

“When the people started arriving, a lot of us didn’t recognize each other because it’s been so long,” said Donna Gratton, who organized the get-together along with Audrey Griffith and Linda Prudat. “It’s been a lot of work, but it’s all been worth it.”

The event began Aug. 11 as people who live outside the Northwest began arriving at the Dorintosh Hall for a meet and greet. The following day, a tour of CHS in Meadow Lake was arranged for those interested in seeing it. A special supper, which included silent draws and live entertainment, was also held.

In total, Gratton said more than 150 people attended the gathering which mostly consisted of people who graduated from 1965, 1966 and 1967. She added, however, the reunion was open to anyone else who was a Carpenter graduate and wanted to be there.

“We found everyone but four out of 230 people,” Gratton explained. “We had to find them all and it took us months. We started last August and we kept phoning people until January.”

While only a handful of people participated in the tour of CHS, Gratton was impressed by the building and noted it doesn’t resemble anything like the school they graduated from. The present Gateway Elementary School was the former location of CHS until the new building was built about 15 years ago.

Gratton also noted they chose Dorintosh for the reunion because it’s a good spot for those wanting to come in from Meadow Lake or camp at the lakes, and local residents were also supportive.

“The Dorintosh community has been fantastic to us because they’ve let people park trailers in their yards and vehicles are parked all around here,” Gratton added.

While many people travelled from faraway places, Margaret Alger didn’t as she’s a resident of the RM of Meadow Lake. She said, it’s been 25 years since many of them had seen each other as a similar reunion was held in Meadow Lake back then.

“It’s exciting to see a lot of the people I knew back in high school,” Alger remarked. “A lot of them have aged very gracefully and it’s good they came.”