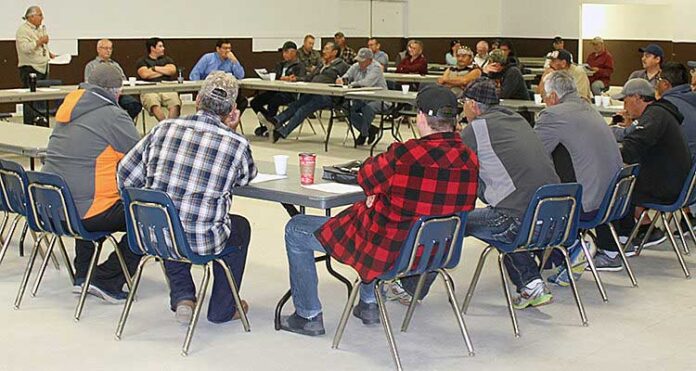 Northwest fishermen could soon organize themselves as a united front in a bid to get the best price for their product.

The idea was discussed at a meeting Aug. 22 hosted by the Ile-a-la Crosse Fish Company. It attracted close to 50 fishermen who were eager to learn what the coming season has in store. One item on the agenda was the creation of a West Side Fishers Alliance, which fish company project coordinator Celine Favreau described as a potential opportunity for the local industry.

“Right now, some communities on this side are selling direct to other buyers besides Freshwater Fish (a federal corporation),” she said. “Different buyers are coming into the region and they could potentially play us against each other and pay groups different prices. If we work together, we’ll be able to maximize our price.”

Favreau noted the Ile-a-la Crosse Fish Company is set to open its new $2.5 million fish processing plant Dec. 1, which will have a larger capacity than the previous facility. In the 2016-2017 season, the company took in more than 500 kilograms of fish with a value exceeding $1 million. Currently, the communities of Ile-a-la Crosse, Patuanak and Turnor Lake sell their fish through the company, and ultimately, Freshwater Fish.

In order to boost profits, Favreau went on to say distributors would be willing to pay more for fish to one supplier with a united approach. She stated one supply system could better take care of quality assurance and a year-round supply.

“If we could all agree to market under one label, we could pack in different locations but supply to the same distributors,” Favreau added. “The distributors would like to find more consistency on a monthly basis. In December and January, the fish comes in and it dwindles down for the rest of the season. They’d like us to have an organized quota management process across the board.”

Fishermen JB Campbell and Norman Wolverine of English River First Nation were both supportive of selling exclusively to Freshwater Fish. Campbell said staying with Freshwater and selling together is a good idea because the corporation is more transparent.

“Freshwater has been around for a long time and they give us a price for the fish they want to sell,” he stated. “The other guys don’t show us what price they’re going to give us for their fish.”

“The buyers coming in have to show us on paper some sort of guarantee,” he remarked. “The only ones doing it is Freshwater. I think everyone is going to stick together because it’s the only way we can make it as fishermen.”

Larry Gardiner from Ile-a-la Crosse would also like to see everyone come together. He wants to get the new plant operating and for it to be successful.

“The fishermen are part of the company and we want to make it work,” Gardiner commented. “My salary has been going up ever since we started our own company. Everyone is making a lot more money than previous years.”

It’s unknown when the West Side Fishers Alliance will be formed, as company officials need to review the information that was gathered at this regional meeting. Another fishermen’s meeting is scheduled to take place in Prince Albert before the start of the season.