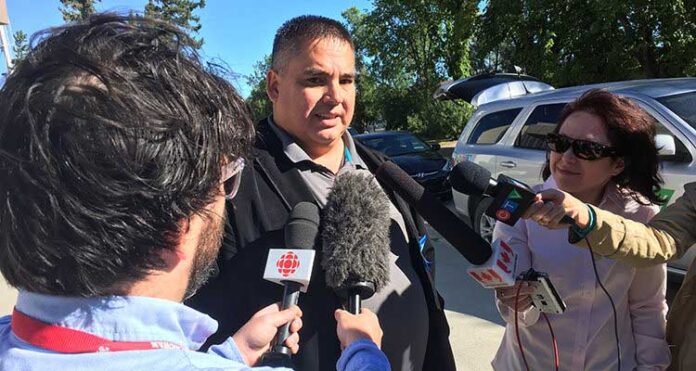 Closing arguments to determine whether the La Loche teen shooter should be sentenced as an adult lasted only 20 minutes before the hearing was adjourned.

The teen, as well as Crown prosecutor Lloyd Stang and defence lawyer Aaron Fox, didn’t appear in-person at the Meadow Lake courthouse Aug. 25, instead doing so via video and phone conference. The hearing began with a Gladue Report entered as an exhibit, which made reference to a history of drinking with the teen’s biological mother. A letter co-authored by two doctors (defence witnesses) diagnosing the teen with signs of fetal alcohol spectrum disorder was also entered as an exhibit.

With the letter entered, Stang asked Judge Janet McIvor for the chance to cross-examine the two doctors. McIvor agreed to adjourn the hearing until Sept. 1, but noted final arguments could continue then as well.

“Perhaps it’s the nature of the matter, but it seems like there are issues at the last minute,” she stated.

Outside the courthouse after the adjournment, La Loche mayor Robert St. Pierre said a lot of people want to see the process move forward, which was what he was hoping to see happen.

St. Pierre went on to say residents of the northern village are still undecided whether the sentencing decision should occur in La Loche. He noted, discussion are underway and, when school is back in session, he will speak with the staff there about it as well.

“There’s still some reservations from some members of the community because of safety or what that might entail depending on the decision,” St. Pierre stated. “Other community members have expressed they’d like to have it in the community. It’s still a toss up where that’s going to lead and there still needs to be some consultation.”

The teen pleaded guilty to killing four people and injuring seven others during a shooting spree Jan. 22, 2016 in La Loche. He can’t be named due to the Youth Criminal Justice Act unless he’s sentenced as an adult. If sentenced as an adult, the teen will face life in prison. A youth sentence carries a maximum term of six years in custody and four years under supervision in the community.