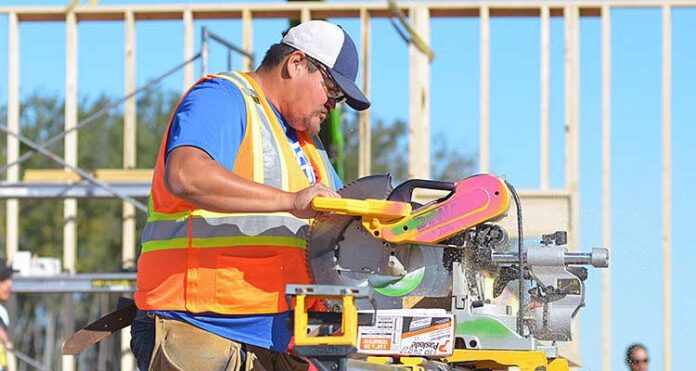 Work is ongoing at the local stockyards where, by this fall, a new office building is expected to be completed. The project, which began earlier this summer, is part of continued efforts to improve the local facility, which – in turn – is expected to enhance day-to-day operations for employees and ranchers alike.

“Toward the end of June, the old office building was demolished and construction of the new, 3,200-square-foot building was started,” explained Brent Brooks of Meadow Lake Livestock Sales Ltd. “We had hoped for a mid-September completion and all has gone well other than a day here and there because of weather.”

Brooks went on to say, because of heavy rain, run-off and an out of control beaver problem, rising waters threatened the grazing lands of many area ranchers. This also delayed the stockyards’ decision to even start the project this year by two weeks.

“Our local contractors and tradespeople have done an excellent job of picking up some of those lost days, assuring a functional facility for the fast-approaching fall run,” Brooks added. “Meanwhile, throughout June and July, the stockyards provided a weekly or bi-weekly weigh day to ensure northwestern producers always had an outlet to market livestock.”

“It will make the stockyards more modern,” Millar said. “The building was outdated and, even though the nuts and bolts will likely stay the same, when something looks good, people tend to put a little more faith in it.”

Millar also said the new building, which will see an improved commons area, kitchen, as well as offices, will allow for a more professional setting when buyers come to Meadow Lake to conduct business.

“They do some big money business,” he said. “Sometimes it’s $1 million to $1.5 million a day. They need to have the space to do business without making deals on the front step or in their trucks.”

The stockyards itself has been located at the present site east of Meadow Lake since the early 1970s. In June 2007, the facility was purchased by the Brooks family and has been operated as Meadow Lake Livestock Sales ever since. In that 10-year span, the stockyards has undergone many updates including the addition of 20 feed and water pens, adequate sorting and penning alleys and a 1,500-head pen expansion with a modern shipping and receiving area.

“He (Brooks) has done a super job and we’re damn lucky he made the decision to come here and run the stockyards when he did,” Millar stated. “Otherwise, the stockyards could have gone the way of our local grain elevators and that would have been a shame.”