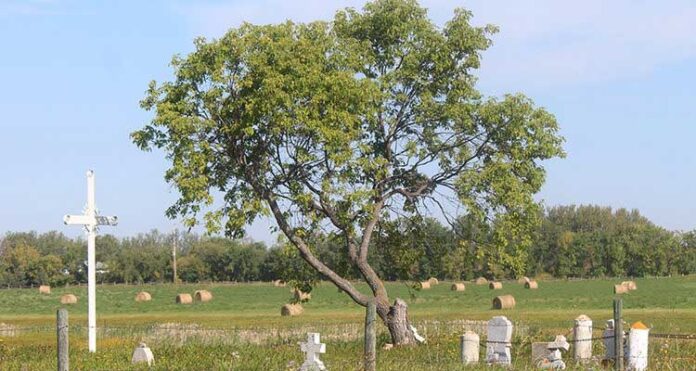 Nearly 150 years ago, the first settlers of what would become Meadow Lake arrived with dreams of making their fortune. Working as fur trappers or ranchers, they cleared much of the land to make room for what was to come. The evidence of those first comers can be found on the top of a small hill written in stone – a place of eternal rest. But, as the years slide by and the St. Cyprien Cemetery is forgotten, will anyone ever step up to preserve it?

Abandoned along the fringe of Meadow Lake’s city limits is a sacrosanct place of peace and historical value that most residents don’t even know is there.

And, while it is out of sight, it certainly hasn’t left the minds of a handful of local people who still remember the St. Cyprien Cemetery. In use from 1909-1942, it’s named after one of Meadow Lake’s (known as Lac des Prairies at the time) first settlers and is estimated to contain the remains of up to 300 people. According to information compiled in 1983, only 226 graves have been found with 47 known to belong to specific individuals.

The cemetery is located on an acre of land near the Backwater Creek. To get there, visitors need to follow 3rd Street East toward the golf course, before turning onto a narrow road opposite the clubhouse entrance. Winding past several properties, it comes to a sharp turn at a private lot where visitors will be met with ‘no trespassing’ signs. Continuing forward, the lane comes to an opening in a fence leading into a field dotted with bales of hay where a makeshift path leads to the cemetery.

Currently, a single elm tree and white cross are the most prominent markers at the location, which has been sealed with a fence of barbed wire and wooden posts. The grass is knee-high allowing wildflowers to flourish around the crumbling headstones of those who once lived. For those who don’t know any better, it would seem untouched by mankind for decades.

It wasn’t always this way, however, as a group of people in 1983 undertook the meticulous task of restoring it. They were from the North West Friendship Centre and included Donna King who was 16 years old at the time. She was working as a summer student that year and found herself giving members of the organization a hand.

“I wasn’t even aware a cemetery was over there and it had been left for quite a few years because they had already started using the current cemetery,” King stated. “Our input was cutting the grass and the maintenance stuff.”

While she admits the summer of 1983 was the last time she visited the site, a group called the St. Cyprien Committee was formed in the 1990s and involved a number of people including Gladys Joseph. According to minutes from a meeting held March 25, 1996, the committee was looking to protect the land by acquiring government funds earmarked for historical sites.

“There were a few people on the committee who really wanted it protected, but it dispersed into nothing,” Joseph revealed. “They wanted to make it a heritage site, but I don’t think we ever obtained any funding.”

In more recent years, the Meadow Lake chapter of the Knights of Columbus have stepped up and dedicated time to cut the grass in the spring. Known as the world’s largest Catholic fraternal service organization, the Knights are dedicated to providing charitable services among other duties. A member of the local branch, Gordon Alger said the group will spend more time maintaining the cemetery once the land is passed to its true owner.

“Once it’s transferred, there will be a chain link fence around it and the tombstones will be fixed up,” Alger remarked.

According to records obtained from the City of Meadow Lake, Cyprien Morin was born at Methye Portage, France in 1829. He immigrated to Canada in the mid-1800s and worked for the Hudson Bay Company in Ile-a-la Crosse. Morin and his wife, Mary Cook, settled within present day city limits in 1873 and, throughout the years, other families followed.

As Morin spent his time raising cattle and running a Hudson Bay post at the current golf course site, the fur trade along the Churchill River increased and routes were expanded through Green Lake and Meadow Lake on the way to Fort Carlton. In 1888, the current location of the city was surveyed for a future townsite and, in 1889, Treaty Six signatories of Flying Dust First Nation assumed title of nearby reserve lands.

With the area starting to flourish, the need for a Catholic Church became apparent and the first was built on Morin’s land in 1908. In 1909, the cemetery was opened and William Delaronde became the first person to be buried there in October that same year. This is about the time the graveyard’s ownership comes into question.

As the story goes, the wife of William Delaronde and Morin’s daughter, Agnes, donated two acres of land via word-of-mouth with one acre for the cemetery and the other for a road allowance. Supposedly, the land was never actually transferred to the Church and, to this day, belongs to whoever owns the land – currently the Lajeunesse family.

“There have been many owners of the property since that time and the graveyard always belonged to the property owner,” Alger said. “It’s going to be transferred to the Catholic Church and the Knights of the Columbus will be the arm that manages it.”

Those beliefs aren’t shared by everyone, however, as members of the Lajeunesse family thought the land had already been transferred over.

“I’m pretty sure it’s the Catholic Church that owns it now,” said Craig Lajeunesse, whose backyard borders the burial grounds.

Lajeunesse went on to say he doesn’t mind people visiting it, noting the trespassing signs are up because nine times out of 10 those entering the property are up to no good.
His aunt, Rita Lajeunesse, has served somewhat as the family historian and she too believes the family doesn’t own the cemetery.

“The cemetery lot is assigned to the Catholic Church and it should be in their records,” she explained, adding the Lajeunesses bought the land in 1944. “Unless the land is sold outright, I don’t see there being an issue and I don’t see that happening. I think the land will stay in the family.”

Next week, find out what can be done to save the St. Cyprien Cemetery.