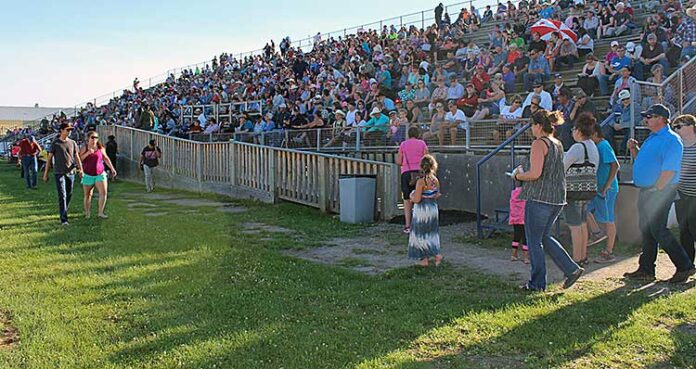 A piece of Meadow Lake history could be history.

During its regular meeting Nov. 14, Meadow Lake city council voted not to repair the grandstand at the local Stampede Grounds, but instead to close the seating area to the public. The city also plans to hold a public consultation on the future of the facility some time in 2018.

“It’s all about liability,” remarked deputy-mayor Merlin Seymour. “If the engineers aren’t going to stamp it without us spending X amount of dollars, there’s no way we can take a chance of something happening.”

According to the official recommendation provided to council by city clerk Jessica Walters, due to its age, the grandstand has required an engineering assessment every two years in order for it to continue to be used by the public.

“In 2015, the assessment resulted in required repairs of $36,000 to the structural beams,” Walters noted. “This repair work was offset by a donation from the Lions Club of $18,000 to allow the grandstand to continue to be used for the duration of their contract with the Canadian Professional Chuckwagon Association (CPCA).”

This year, however, the grandstand was assessed again, and the report indicates a significant investment would need to be made in order for the seating area to continue to be used. Repairs to the stands are estimated in the range of $115,000 or more. In addition, the rest of the Stampede Grounds facilities, including the concession booth and fences, are also ageing and will require significant investment in the future.

In light of the significant costs and short timeframe involved, the Lions Club will not be renewing its CPCA contract for 2018. The Lions have sponsored the races for the last decade-plus.

“If the grandstand is not repaired or replaced, it means we will no longer be able to host chuckwagon races in Meadow Lake,” stated Lions Club member Nels Andersen. “It’s not the city’s decision, but rather the decision of the insurance company. They won’t insure it if the necessary work isn’t done, so in the meantime we lose out on this major fundraiser and will have less money to spend on initiatives throughout town.”

Meanwhile, CPCA driver and executive member BJ Carey said it’s disappointing to know there will be no chuckwagon races in his hometown this summer.

“It sucks not to be able to race in front of the Meadow Lake fans, but we have other venues waiting to sign contracts,” Carey said. “It won’t hurt the CPCA, but it will add more miles for our guys because these other venues aren’t as close as Meadow Lake.”

According to city administration, it’s no longer financially viable to keep repairing the current grandstand, and a decision will need to be made about whether the stands should be replaced or permanently removed.