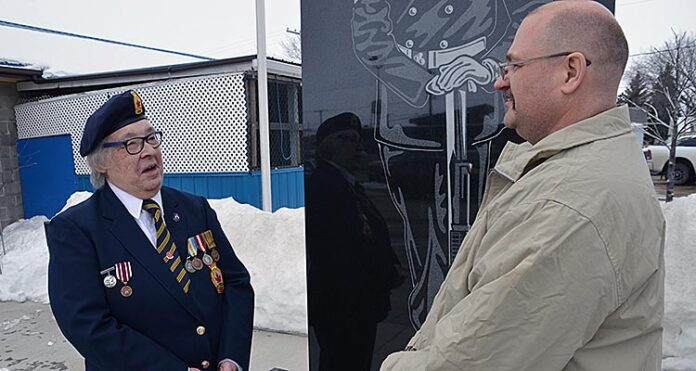 For Rick Burnett it’s not so much a calling as it is an overwhelming desire to simply do good.

Burnett, a long-time Legion member and community volunteer, recently took on the role of Legion chaplain at Branch 76 in Meadow Lake. It’s a duty he inherited from former chaplain Flo Campbell who retired following the Legion’s annual Remembrance Day service back in November.

“Unfortunately, nobody else had an interest in doing it, so I’ve stepped up to the plate to serve as chaplain,” Burnett explained. “I took on the role around the middle of January.”

While his services haven’t been required too much as of yet, Burnett’s new role will mainly require him to lead prayer and to read scriptures at various special functions including Remembrance Day services, Legion dinners and other events, as well as at funeral services for Legion members who pass away. He also plans to visit Legion members who are sick in hospital, at home or living in the local long-term care facility as often as he can.

“Back in the day, I was an altar boy,” Burnett said. “I’m Roman Catholic and, at that time, we were big into going to church, so I became an altar boy at Notre Dame Church in North Battleford. I’m familiar with some of the scriptures, so this is now another tool I have access to when it comes to helping our veterans.”

Burnett regularly organizes special fundraisers and other events as a means of supporting Canadian veterans in need of a helping hand.

“My father was a Second World War veteran,” Burnett continued. “He passed away five years ago, and – ironically – this year is the 75th anniversary of the landing in Sicily where my dad fought with the Seaforth Highlanders. They landed in Sicily 75 years ago, and I want our Legion to succeed in paying respect to our veterans who have fallen, not only in battle but after the battle. The biggest battle now is one we used to call shell shock. Now it’s called post-traumatic stress disorder (PTSD). If we can have something in place at the Legion to give the support to veterans or first responders who need to talk, I’m happy to be a part of it.”

Campbell, who served as Branch 76 chaplain for more than a quarter-century, said she is very pleased to see Burnett assume the position.

“Rick Burnett and I have been friends for years,” Campbell said. “I came to Meadow Lake in 1992 and he was one of the first people I met. He does a lot of volunteer work at the Legion and through other organizations, and I am very pleased to see he is taking on the role of Legion chaplain. He’s going to do a very good job because he is a real people person who cares, who understands veterans, and I know he will be outstanding in this role. I can’t think of a better person for the job.”

Campbell went on to note the Legion chaplaincy is different, as the chaplain is mainly there as people need the support.

“Still, it’s a very rewarding job,” she added. “I served locally for more than 25 years, but I was also the chaplain at the Legion in Estevan for four years prior to coming to Meadow Lake. I haven’t really given Rick any advice as of yet, but I’m sure he’ll call me if he needs anything. It’s a job you kind of roll into and one where you don’t really know what you need until the time comes.”

“Flo has done a phenomenal job for our community and as chaplain for the Legion for so many years,” he said. “Now I have big shoes to fill. I’m sure I’m going to be asking Flo some questions, but with her guidance I believe we can work through this and make things go the right way.”

In the meantime, Burnett asks for one thing.

“Respect our veterans,” he said. “If it wasn’t for them we wouldn’t have what we have today. We need to honour our veterans and our first responders.”