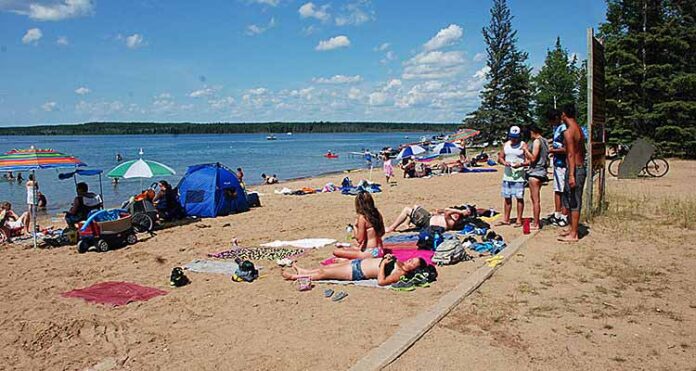 This is the message the Ministry of Parks, Culture and Sport is encouraging the public to hold near and dear to their hearts while a long-anticipated construction project is completed at the Kimball Lake campground in the Meadow Lake Provincial Park.

“We’ll be completing some road improvements within the campground and some adjacent roadways,” explained Byron Davis, the ministry’s director of facilities for provincial parks. “We’ll be adding granular, rotomixing the road surface and sealing the roads in that campground. There will also be some work done to parking lots and some of the access roads.”

Because the work – which the ministry is undertaking in conjunction with the Ministry of Highways – is expected to begin later this month and wrap up by the Canada Day long weekend in July, the park announced bookings for Kimball Lake would open much later than those for other campgrounds. According to park manager Robin Van Koughnett, bookings for Kimball are now scheduled to open June 24.

“I couldn’t give exact numbers, but typically in May the amount of people who book sites in the park is very low,” Van Koughnett said. “Once we get into June, it starts to pick up. Then, once the school year is over, Kimball typically fills up.”

However, Van Koughnett also said there could be slight delays depending on whether or not Mother Nature impedes the road project in any way.

“We could still get some of that cold, white stuff coming even at the beginning of June, so it’s very weather dependent,” Van Koughnett noted.

“We scheduled the work to have the least possible impact on our campers,” he said. “We want to upgrade the roads because they’ve deteriorated over time and – with other work in recent years to upgrade underground infrastructure – there’s a need for this other project now. We want to carry out the work early enough so it has the least possible impact on the camping season, but it also has to be carried out when the weather is least conducive to that work.”

While overall numbers have yet to be finalized, the project is expected to cost in excess of $600,000.

“It’s warranted for sure,” Davis remarked. “We want to address infrastructure needs in our parks when we can and this is one of those that’s been identified under the roadwork area. From what I understand, most people are happy this is going to happen and agree it’s been long overdue.”

Someone who is in agreement with this is Sharon Hofer who operates the Kimball Lake Store located at the campground.

“They’re paving throughout the campground – it’s long overdue,” Hofer stated in a previous interview. “For a long time we’ve had some rough roads filled with potholes. I think this will be a great improvement.”

“What we’re also going to do – or at least attempt to do because I can’t make any promises – is still have access to the beach area (while the work is ongoing),” he said.

Other planned improvements for the Meadow Lake Provincial Park this year include service centre replacements at both Greig and Kimball Lakes.

“We also have some electrical upgrades planned at the Murray Doell campground along with some smaller projects like improvements at the Greig Lake boat launch and interpretive centre,” Davis concluded.