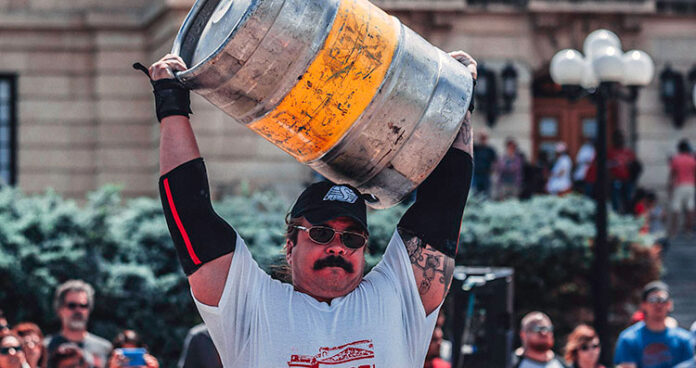 Former Meadow Lake resident Samuel Rissling is going places – because of both his brains and his brute strength.

Currently in his fourth year at the University of Regina, Rissling is working toward his education degree with plans of one day becoming a teacher. Outside of the classroom, however, he enjoys showcasing his physical strength and toughness by participating in amateur strongman competitions.

“In March 2019 I’ll be attending the Arnold Sports Festival in Columbus, Ohio,” Rissling, 23, said. “That’s an event with thousands of people from around the world competing in a number of different strength sports such as powerlifting, bodybuilding, strongman and more. I’ll be part of the Amateur World Strongman Competition.”

Rissling, who will compete in the 105-kilogram weight class, said this is his first international event, adding he’s very excited to see how he fares on the world stage.

“I started competing in strongman events last year and never thought I would make it this far so fast,” he said.

His journey toward the Arnold Sports Festival began when Rissling was a high school football player in Regina. While in Grade 11 he started to work out, and two years ago he began the specialized training that goes into being a strongman athlete.

“There’s a gym in Regina called the Mettle Performance Training Centre,” Rissling noted. “A friend invited me to work out there one day, so I did and before I knew it I was at my first competition in April of 2017. It was a beginner/novice show, but a great way to get my start. I was involved in a lot of team sports when I was in high school, but not so much at the university level. This is something that involves just me and how successful I am depends entirely on me coming out to play.”

The Arnold Sports Festival is an annual multi-sport event consisting of professional bodybuilding, strongman, fitness, figure and a bikini weekend expo. It was established in 1989 and is named after Arnold Schwarzenegger.

“This is our 30th year, while last year’s festival attracted 200,000 including numerous athletes from a variety of strength-related sports,” stated Matt Lorz, a spokesperson for the Arnold Sports Festival. “The strongman competition is only one of a number of events that will be featured.”

Lorz also said Schwarzenegger himself is scheduled to be in attendance.

“He’ll be there,” he said. “He’ll tour the expo and go on stage to present a few awards. He likes to talk to the athletes – it really helps to get them pumped up for the various competitions.”

Meanwhile, in order to qualify for the Arnold Sports Festival, Rissling had to first make an impression at provincials where he claimed the top spot in his weight class and third overall. From there, he competed at the national level where we won four out of five events.

At the professional/amateur Western Canada Strongest Man event earlier this year, Rissling was able to pull a 38,000-pound disposal truck a total of 80 feet. Thus far he considers this his greatest feat of strength.

“My true goal is to complete my schooling and become a teacher, but I’ll still compete in strongman events for as long as I’m healthy enough to do so,” he said.

Rissling was born and raised in Meadow Lake before his family (parents Kim and Connie Rissling) moved to Regina when he was in Grade 5.