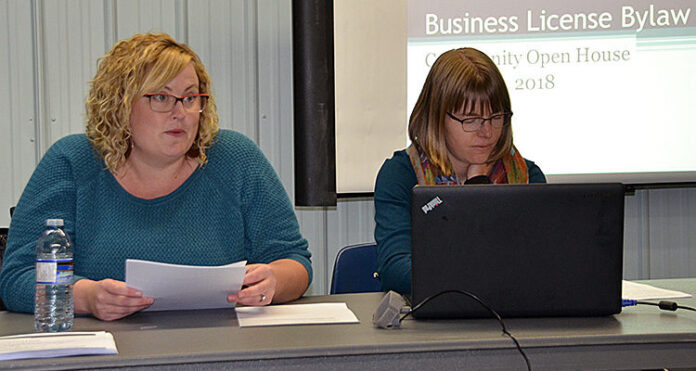 The City of Meadow Lake’s existing business licence bylaw could be in for a change.

While a decision to alter the legislation has yet to be made at the council level, city officials went ahead with a recent public open house to discuss the bylaw and to garner even more feedback from the business community in spite of the fact only two members of the public were in attendance. The open house took place last Thursday (Oct. 4) at the Meadow Lake and District Arena.

“This presentation will provide some background on our business licence bylaw as well as the results of a public survey conducted during the summer,” remarked city manager Diana Burton. “This summer, council reviewed a report from city staff asking for an in-depth review of the business licence bylaw. This report was primarily initiated by staff’s concerns the bylaw hadn’t been reviewed for a significant amount of time and a desire to ensure the contents of the bylaw still aligned with the goals and priorities of both council and the community.”

The city looked into several key areas such as who it should request business licences from, how much it should charge for these licence, what the city is offering through a licence program and what reasons there are for having a licence program.

“As the first step in this review process, we sought community feedback,” Burton continued. “Copies of a survey were mailed out to all local licence holders, commercial property owners, as well as the local chamber of commerce. We also promoted the survey via our website, advertising and on our Facebook page. The community response, however, was lower than expected with only 91 respondents. This makes it difficult to draw too strong of conclusions from the responses we received.”

Results of the survey show more than half the respondents were local residents with no direct ties to any businesses.

“The major trend we saw were requests to have day cares licensed, lower licence fees for residents and increased inspections,” Burton added. “Fifty-three per cent of responses came from residents, business owners and licence holders made up 42 per cent of respondents… the majority of responses came from people not currently required to obtain a business licence. The response to our question about enforcement priorities was fairly evenly split – most people who answered are either strongly against or strongly in support of enforcing this bylaw.”

Currently, only businesses that do not pay commercial property taxes are required to have a licence.

“Survey results go on to indicate 26 per cent of respondents prefer to leave the rules as they are, 34 per cent support expanding the bylaw to cover all types of businesses and the remaining 40 per cent support some sort of reduction in scope,” Burton said. “A slight majority feel licence rates should be higher for non-residents.”

Meanwhile, some suggestions offered via the survey as to what businesses should not require a licence included businesses that already pay commercial property tax, businesses that don’t generate enough income, a reduced rate for seasonal businesses, home-based businesses and landlords. Some respondents, however, felt landlords and home-based businesses should be licensed along with day cares, contractors and food services. Other suggestions included prorated fees in the first year if a business starts part way through the year, basing the fees on the size of the business, enforcing the bylaw equally and consistently and more.

According to Burton, the feedback generated from both the survey and the two members of the public on hand for last week’s open house, will be discussed at a future council meeting at which time a decision will be made. Possible bylaw changes include: decreasing local licence fees from $300 per year to $200; creating an incentive for renewing licences on time; requiring licences from commercial businesses; requiring all day cares to be licensed; creating a directory of licence holders; doing more work to assess the impact of businesses operating in a residential area before issuing licences and requiring more from licence holders such as proof of any required provincial licences, health inspections and more.

“The results of the survey and tonight’s open house will be presented to council and they’ll make a decision as to what direction they want to give for any changes,” Burton said.

In terms of last week’s poor turnout, Meadow Lake and District Chamber of Commerce president Gerald Pohl said he wasn’t personally aware of the open house until shortly beforehand and, as such, was unable to attend.

“I don’t know if (chamber administrator) Adriane (Ouellette) received any notification about it either, but the reality is I didn’t have enough notice,” Pohl said. “If I was able to, I definitely would have attended.”

Pohl did state, however, the reason for the low attendance could be the fact commercial businesses are currently not required to obtain a licence from the city.

“It doesn’t really apply to any businesses with brick and mortar,” he said. “I believe it’s more focused on home-based businesses and things of that nature.”