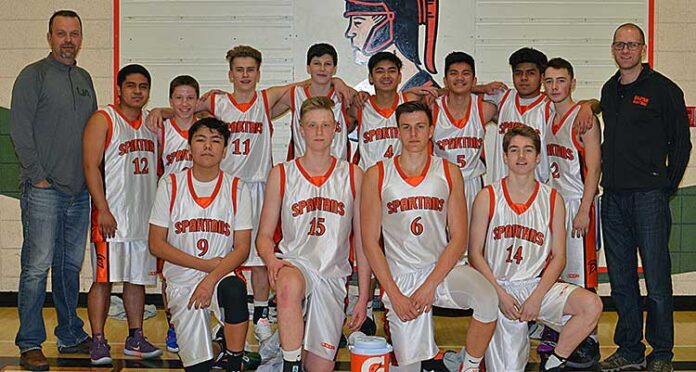 The only thing better than winning is winning in front of a hometown crowd.

This is exactly what the Carpenter High School boys basketball team got to experience this past weekend when they emerged victorious at the annual Northern Lights Classic held Friday and Saturday at CHS.

“It was great,” remarked CHS boys basketball coach Jesse Shakotko. “You don’t always win your home tournament, and that can be really disheartening. This was really nice in terms of giving our guys a little boost as well as some pride. They went 3-0 to come out on top.”

In their first game, played Friday afternoon, CHS took on the team from Onion Lake.

“That was a good game because a lot of students were on hand to watch, and it was a game in which a lot of our young guys had an opportunity to get some court time,” Shakotko continued. “They played very well, ran through some offences and did what they were supposed to do to get the job done.”

“JPII is another 4A team, so this made a win against them very important – maybe even more important than winning the tournament itself in terms of improving our spot in the rankings,” Shakotko said. “I stressed that to the boys and they were able to rise to the occasion. In the first three minutes, we were up 14-0 and we just maintained that lead throughout. Of the first 16 points we put on the board that game, Drew Ackerman scored 10.”

CHS won the encounter by a score of 79-62. The win moved CHS into the final against Carlton from Prince Albert.

“I was kind of hoping we’d meet the team from St. Brieux,” Shakotko noted. “They were last year’s winners here, but were defeated by P.A. Carlton in overtime. The P.A. game was a real battle, both teams were very evenly matched.”

Shakotko said P.A. had some size on their team, but CHS held tight and focused and came away with the 65-59 win. Shakotko also said the depth of the Spartans roster played a big role.

“At the start of the season I wasn’t sure how deep the bench would be,” he stated. “I’m very happy with how things turned out. Everyone played very well, especially our guards who worked hard to defend the ball. Their aggressiveness is what really helped guys like Drew and a few others get the rest they needed to be able to score when the time was right.”

“We’ve been having our fair share of success this year – this is our fourth tournament of the year, and our fourth finals,” Strom said. “We lost to them in our home tournament. The final was a little closer tonight, so we’re making strides.”

Strom also said CHS’ ability to switch from a man-to-man to a zone defence helped turn the tide in Saturday’s final.

“It was a zone defence we don’t see too often,” he said. We haven’t practised much against it, so we made a few adjustments on the fly. It put us down six or seven points and that was the game changer.”

CHS has four Grade 12 players – Kyle Morin, Jace Timmer, Aldrin Zamora and Alvin Zamora – who are all pleased to come away with a win at their final home tournament of their high school careers.

This coming weekend, CHS will compete at a tournament in Melfort. Meanwhile, the CHS girls basketball team was not in action this past weekend, but coming up they will compete in Moose Jaw.