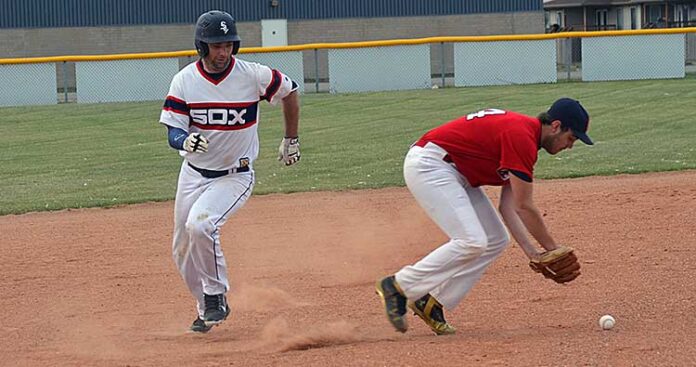 The Sox earned a 10-5 win over the visiting Unity Midgets Tuesday night (May 14) in their 2019 North Saskatchewan River Baseball League (NSRBL) season opener held at Assman Field in Lions Park. According to team manager and veteran Sox player Kevin Gerwing, the lineup is looking strong this year.

“Our first game of the season went very well,” Gerwing said. “We had some strong pitching from Craig Weran, our hitting was up to par and we definitely did what we had to do and that was to hit the ball hard. Our fielding still needs some work, but that’s expected considering it’s still early and we haven’t had a lot of time to get outside and practice.”

The Unity Midgets is one of two new teams to join the NSRBL ranks this year along with the North Battleford Midgets. Gerwing said, considering the Unity squad featured players between the ages of 16-18, the experience factor truly came into play.

“They’re a Midget team, so hitting off speed was going to be an issue for them,” Gerwing said. “But, they’re only going to get better. That’s why they joined the NSRBL and that’s why we put Doc (Weran) on the mound. He fed them a steady line of curve balls all night and, even though they put up a good fight, they’re still learning. They do have some really good athletes, though.”

Even though it was a successful night for the Sox overall, it wasn’t a very good start to the season for veteran Sox player Quincy Winkler. During his first at-bat of the night, Winkler fouled a ball off his shin. The injury landed him in the dugout for the remainder of the game.

“It caused a lot of swelling under his right knee – he had quite a goose egg on his shin, so we’ll have to see how things go and see if he’ll be able to walk and run again come our next game which is next Thursday (May 23) in St. Walburg,” Gerwing explained.

Gerwing went on to say the Reds will likely be more of a challenge than Unity was this week.

“St. Walburg has been in the league for a number of years, so they know what to expect,” he said. “It will be a chance for us to see what our new pitcher – Heather Healey, who played on the Canadian national women’s team at one time – can do.”

Healey was not at Tuesday’s home game, but Gerwing said she is a welcome addition to the roster.

Meanwhile, the team, primarily through the efforts of player Owen Dancy, plans to introduce a number of promotional endeavours this season. One such endeavour includes having a different Multiworks client throw the first pitch at each home game. Tuesday’s special guest was Andrew Sergeew.

“We’re also giving away pizza from Boston Pizza to a lucky fan every time we score seven runs or a home run during our home games,” Gerwing said. “We also plan to have different game day sponsors. It’s a way of hopefully getting more people to come out to our games and to support the team. And, it’s a lot of fun at the same time.”

The team’s next home game is May 30 against the North Battleford Beavers.