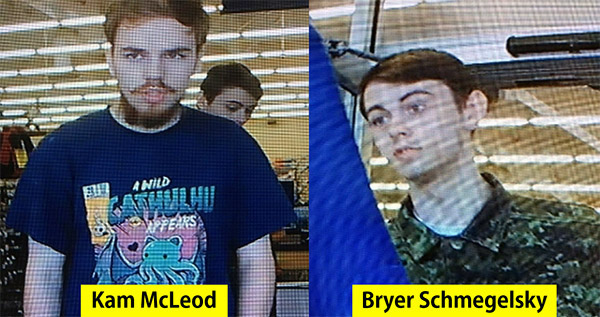 The search is over.

Two bodies found in a wooded area in northern Manitoba yesterday morning (Aug. 7) are believed to be those of Kam McLeod and Bryer Schmegelsky, the two Port Alberni, B.C. teens wanted in connection with the shooting deaths of Australian tourist Lucas Fowler and his American girlfriend Chynna Deese, as well as for the murder of 64-year-old University of British Columbia lecturer Leonard Dyck.

According to Assistant Commissioner Jane MacLatchy, commanding officer of the Manitoba RCMP, the bodies were discovered Wednesday at approximately 10 a.m. local time in dense brush, approximately a kilometre from where items linked to the fugitives were found along the Nelson River. An autopsy will take place in Winnipeg, however, to confirm the identities and determine the cause of death.

“I’m confident it is them, but to be sure we have to go to autopsy,” MacLatchy told reporters during a Wednesday afternoon press conference.

The bodies of Deese and Fowler were found July 15 along the Alaskan Highway in northern B.C. Meanwhile, Dyck’s body was found July 19 near Dease Lake, B.C. about two kilometres from where police also discovered a burned out truck belonging to McLeod and Schmegelsky. Up until that time the duo were considered missing, but they quickly became suspects in what turned out to be a cross-country cat and mouse game that between July 19 and 21 brought McLeod and Schmegelsky to Meadow Lake. They stopped in at a local salon for haircuts and were spotted at another business in town. This is where police obtained their only public security footage of the two which quickly spread nationwide as the manhunt gathered steam.

“I am both saddened and relieved,” noted Meadow Lake resident Carla Silver, the individual who spotted the pair in Meadow Lake July 21 and alerted RCMP the following day when she learned the police were looking for them. “I am sad two young people had such twisted perspectives on life that they wasted theirs and took the lives of others. I am also sad for the victims’ families because they will be missing the closure that comes with knowing exactly what happened. But, I am relieved no other people were harmed or killed.”

Silver, who initially asked not to be identified for her own personal safety concerns, said the last couple weeks have been intense in terms of not knowing how the situation would play out.

“The experience of having seen them, remembering them and calling them in has been a roller coaster of emotions, none of which have been good,” she said. “I am glad I was there at the right time and that God has given me the gift of being aware of my surroundings. I am also happy I was able to provide the information I did and now, hopefully, in my mind, I can let this go and also have some closure.”

This was echoed by MacLatchy during Wednesday’s press conference.

“Obviously there is a certain amount of relief we were able to locate these people and, hopefully, bring closure not only to the families of the victims, but also to the people of Gillam, MB and the surrounding area,” she noted. “This will hopefully give people the opportunity to exhale and eventually go back to a normal life without being afraid of who may be out in the woods anymore.”

MacLatchy could not comment on the homicide investigation as that is currently in the hands of the RCMP in British Columbia. She did, however, state the search for McLeod and Schmegelsky was able to be narrowed once the personal items were located where they were last week.

“(Where the bodies were located) is a very dense place with very tough terrain,” she said. “It was a large area we were searching, so it was difficult to pinpoint anything at first.”

The bodies were discover by specialized RCMP resources conducting a foot search in the area.