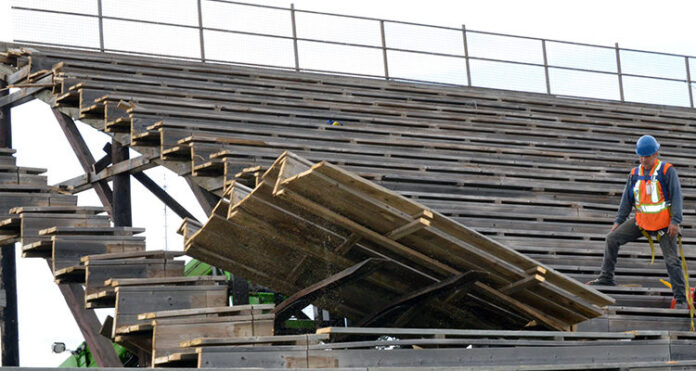 A piece of Meadow Lake history is no more.

Originally scheduled to begin work Aug. 12, a demolition crew got a head start early and, on Tuesday (Aug. 6), the dilapidated Meadow Lake grandstand – which, for decades, served as a local landmark and was synonymous with the nearly 100-year-old Meadow Lake Stampede – started to come down.

“The grandstand is being demolished because engineering assessments have shown it’s not safe for use for event crowds, and – based on the history of those inspections over the last 10 years – it’s been determined the original structure is no longer worth investing in repairing,” explained acting city manager Jessica Walters. “ Even though the decision was made not to repair the grandstand in the budget discussions for 2018, council also decided not to demolish the grandstand until there was a clearer direction about what the next steps after that would look like.”

The seating area itself had been closed to the public for more than a year with signage posted to warn people to stay off the structure for their own personal safety. Meanwhile, a committee was formed by concerned community members with the goal of raising as much money as possible to put toward the construction of a new grandstand at the current location adjacent to the Meadow Lake Civic Centre.

However, on May 27, city council decided not to support a standalone grandstand at that location but instead said it would support the development of a multi-use community facility at the site, which would incorporate a new grandstand into its design. This project, if officially given the go-ahead, is expected to take several years to reach completion.

In the meantime, during council’s regular meeting July 22, questions were raised with regard to the demolition. Councillor Tom Harrison said it needed to come down because not everyone was respecting the warning signs to stay off the structure.

“I went by the grandstand and it looked like somebody was having a council meeting of their own at the top of it,” he said.

“Every time I go by there I’m seeing more and more people up at the top.” he said. “I know we have signage up and stuff, but who is liable for that?”

This was also echoed by acting mayor Merlin Seymour.

“It doesn’t matter what time of day you go by there are people up there,” he noted.

In closing, Walters said there was a bit of a delay with the demolition because the contractor hired did not want to start the work prior to last month’s midway which was set up nearby.

“A number of people were also camped back there for the First Nations Summer Games,” she added. “It was originally scheduled for June, so it’s about a month or so behind.”