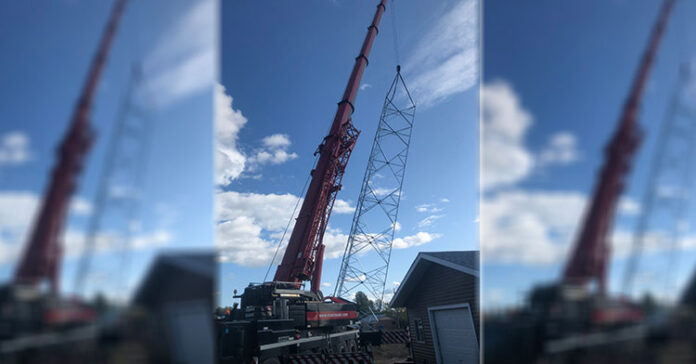 The lines of communication are wide open in Ile-a-la Crosse.

A crew from CCL Communications out of Cold Lake was in the North last week to construct a new, 250 foot-communications tower. The new tower will allow access to wireless high-speed Internet with speeds up to 25 MB per second to locations around Ile-a-la Crosse, while the community’s FM radio (CILX FM) was installed right at the top providing a radio signal that reaches farther than ever before.

Corrigal said, while it’s exciting to have the community’s radio diagonal boosted to levels it’s never been to before, the ability to provide residents in Ile-a-la Crosse and the surrounding area wireless high-speed Internet is a real plus.

“High speed is currently available in the community as part of our local cable system and from SaskTel through the phone line, but those services are limited,” he said. “This new tower will improve service to the outskirts of our community, as well as to those seasonal residents who live in cottages and cabins by the lake. We launched high-speed Internet in March 2018 and we were one of the first small communities in the North to do so. Unfortunately it wasn’t available for people living just outside of town, so naturally they contacted us to see if we could improve our service so it could include them as well.”

After conducting much research into the request, CCL Communications seemed like the right fit.

“We talked to them about what we wanted to do, they sent us a quote and, from there, we were able to secure funding through the Clarence Campeau Development Fund, as well as Primrose Lake Economic Development Corporation (PLEDCO), which helped us to create a business plan,” Corrigal added. “Without grants from these two organizations, we would not have been able to do this. It’s very exciting because we’re now able to bring the best in communications services to Ile-a-la Crosse.”

This was echoed by Ile-a-la Crosse mayor Duane Favel.

“Everyone is excited,” Favel noted. “This new tower is going to reach a lot further and will really be a benefit to all the people who live just outside our community, those living in nearby cabins and at the lake.”