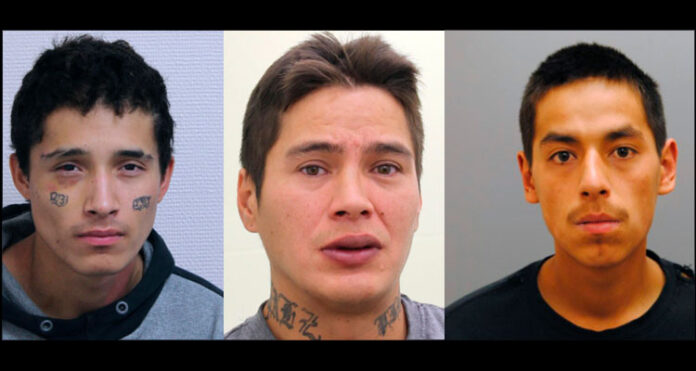 The Pinehouse Lake RCMP is asking for the public’s assistance in locating three inmates who escaped lawful custody of the Besnard Lake Correctional Camp between Monday, Nov. 4 and Tuesday, Nov. 5.

Jesse Chanalquay, 30, Brent Mosquito, 21, and Clifford McKenzie, 38, were reported missing to Pinehouse Lake RCMP at 8 a.m. Nov. 5. They were last seen at 11 p.m. Nov. 4 during a head count at the camp. It is believed the men are travelling together and are headed to Dillon or Ile-a-la Crosse.

Chanalquay is described as a slender, Indigenous male, 5’11”, approximately 141 lbs., with short black hair and brown eyes. He also has a tattoo on his right fingers.

Mosquito is described as an Indigenous male, 5’8”, approximately 175 lbs., with short black hair and brown eyes. He also has tattoos of a cross, snake and tribal art on is right arm, as well as tattoos on his left hand and cheek, the West Side Outlaws gang stamp on his right hand and on his right knuckles.

A warrant for arrest has been issued for all three individuals. Anyone with information on the whereabouts them are asked to contact their nearest police service or Pinehouse Lake RCMP at 306-884-2400. Calls to Crime Stoppers at 1-800-222-8477 can also be made.